How the San Fermin festival changed my life

Ivan had never considered himself a traveller, until running with the bulls in Pamplona changed his life.

by Shanaka
in Inspiration, Running of the Bulls 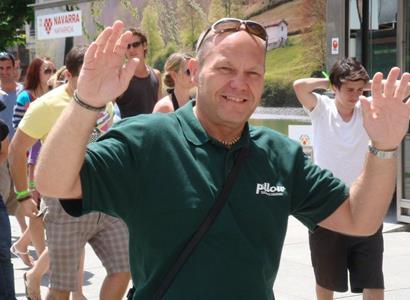 To be honest, I am surprised you are still reading. It seems almost every travel magazine or travel website has hundreds of stories highlighting how travel will “broaden your horizons“and “change the way you look at life”. Don’t get me wrong, I don’t dispute that spending 6 weeks living with orphans in Rwanda would make an impression on you, it’s just I have never considered myself a traveller and the thought of dragging my rucksack around third world countries for months on end has never really appealed to me. So if you had asked me 2 years ago if a quick 6 day bus tour to Spain would change my life, I would have laughed at you.

I have to be truthful, in June 2009 I was generally very happy, but my life was lacking a bit of a spark. OK I was a little overweight, but I had a great job as a health and safety officer (you will see the irony of this later) in a fantastic company, a wonderful girlfriend called Judy, and I was enjoying watching my lovely kids grow up and gain increasing independence. To many people my life was perfect, but I wanted just a little bit more, I needed a brief adventure, I needed just a sniff of danger that would make me feel alive again.

Around the same time, I was watching old repeats of the TV show Top Gear, and they showed the one where Richard Hammond  ran with the bulls in Pamplona. I was immediately sold on the idea; this was the challenge I needed, if I ran with the bulls just once, I could carry on and live the rest of my life in safety and comfort. So I persuaded my girlfriend this was a one time deal, and just something I needed to do to “get it out of my system”. She reluctantly agreed on condition she could also come along! I jumped on the internet, and booked a six day London to London Pamplona tour with Pillow Adventure Travel Company Ltd for two people, and started to count the days until my Spanish Bull Running experience.

We had a little shock when we turned up at Embankment Tube station on 4 July to meet the tour, as we were surrounded by fit young and healthy Australians and Kiwis, all aged between 20 to 35 years old. I felt a little out of place, being English, middle aged and overweight, but they were a fantastic group and made myself and Judy feel right at home. Soon enough we were inPamplona, and I was undertaking aBull Runorientation walk with a Pillow tour guide called Jon. Now Jon looked like a bull runner, he was 6 foot 5 inches tall, tattoos all over him and built like a heavyweight boxer. Within 5 minutes of ourBull Runorientation walk, we were all terrified. A cool and casual Jon pointed out where people “had been gored last year”, and “this is the corner where somebody was killed a few years back”. My favourite line was “there is nowhere safe on this course, but you really really don’t want to be in this spot tomorrow at the same time as the bulls”. 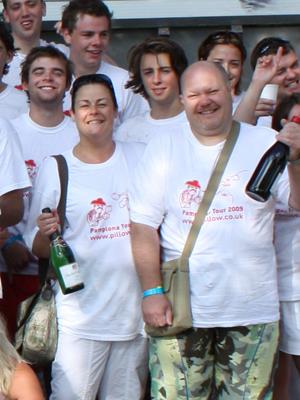 Ivan on the 2009 Pamplona tour with Pillow Adventure Travel Company.

The next morning rolled around, and I found myself at 7.55am waiting on the Bull Runcourse to hear a rocket which signals the officials letting the bulls out of their pen to run alongside the public. It was an amazing feeling, danger, excitement, nervous energy all contributing to an adrenalin-fuelled high. There was a wonderful camaraderie with fellow runners, and the anticipation became almost unbearable. Suddenly the local Spanish runners broke out into song, in what I assume was an act of defiance against the inner fear they were feeling. I don’t remember much about my first bull run, I remember hearing the hooves on the cobbled streets, and then suddenly they were alongside me and I could hear the heavy breathing of these magnificent animals. Then in a flash they were past me, and I was safe and the experience was over. For hours after I was buzzing and my only thought was I needed to do it again tomorrow!

Judy was of course furious that my “one time only” promise was broken, but she turned a blind eye to the danger and tried to support me as I ran the next morning, and the morning after that as well. After three bull runs I had to return home with the tour, but I was a changed man. The feeling of anticipation just before they released the bulls was like a drug, and I needed more!

On my return home, I decided I would return to Pamplona and run again the following year. The difference would be, I knew what I was getting myself into, and I was going to get serious. I hit the gym and lost over 20% of my body weight, and found myself reading everything I could find about the San Fermin Festival and Running with the Bulls. My excitement for bull running was so great, I even spent my evenings in Internet chat rooms talking to local Spanish runners about the Bull Runcourse and gaining local knowledge. I literally could not wait to run with the bulls again.

I contacted Pillow Tours, and told them about my excitement about the Bull Run, and asked them if I could rebook the tour for the following year. To my surprise, things took an unexpected turn, as they asked me if I would like to be a tour leader for one of their Pamplona tours. So again myself and Judy turned up at Embankment, and were again the only English middle aged people there, but this time I was running the tour rather than being a passenger. I tried to give my passengers as much information about theBull Runas possible, and l loved my new role as a part time Pillow tour leader. The clients seemed to like the fact I was so passionate aboutPamplonaand Bull running, and knew what I was talking about. I must have done OK; I was asked to be a tour leader for Pillow again in 2011 and will be again in 2012 and hopefully for many years to come. 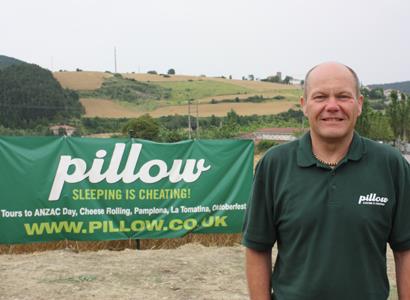 Ivan as a Pillow Adventure tour leader on the 2010  Pamplona tour.

Despite the fact I have lost loads of weight and now run with the bulls every year, my life has completely changed as I now go in search of that elusive adrenaline fuelled high whenever I can. I am now addicted to extreme sports, and will take any opportunity to throw myself off, at, or into something. I still work full time as a health and safety officer, but also love my new life as a part-time Pillow Tour leader. A great example of my new life was September last year whilst working for Pillow Tours during Oktoberfest (The Munich Beer Festival). I leftMunichand drove none stop to Verzasca Dam in Switzerland to throw myself off the Goldeneye Bungee Jump, and as soon as the jump was finished, I drove straight back toMunichand the Beer Halls to carry on working. 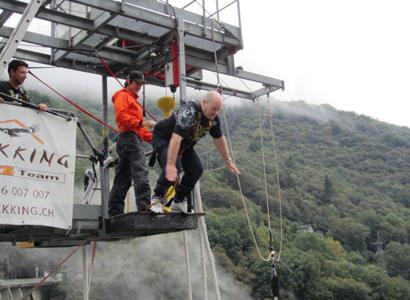 Judy is most unhappy about my new lifestyle and the dangers it entails, whenever I tell her excitedly about my next new extreme sports challenge, she always says “I should never have let you do that first Bull Run, you’re a changed man since then”. Which brings me neatly around in a full circle, to the idea that travel can change your life? I guess the point of my story is, travel really does change people lives, perspectives and outlooks, but you don’t always need months of living inOuter Mongoliato be touched by the travel gods. I never expected a six day coach tour to make such a profound change to my life, but I am really glad it did!