So, you're off to Oktoberfest in Munich? Here's the ten best ways to make the most of the Beerfest debauchery. 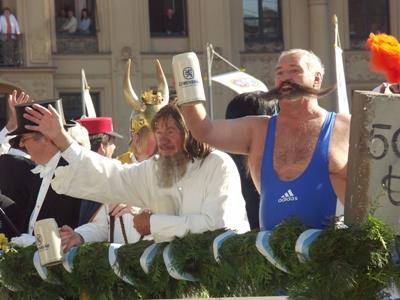 1) Get there early
No one likes waiting in line. But, if you think banks, ticket windows and public transport rank as the most infuriating, try waiting in queue while frosty beer mugs are rushed by and the smell of cooked bratwurst is in the air. Its torture, yet it’s what you’ll face if you don’t get to an Oktoberfest tent by early afternoon.

Top Tip — Don’t hang around the beer hall entrances. Make a bee-line to a table and sit down, because you won’t be served otherwise.

2) Change tents
This depends on how long you have at the festival. If you’ve only got a day, then pick one tent and stay put – the last thing you want is to lose a perfectly good position in an attempt to find something better. However, if you’ve got multiple days then experience the unique atmosphere and variety each beer hall has to offer.

Top Tip — This is entirely personal, but the pick of the 14 tents are Spatenbrau, Lowenbrau, Paulanerbrau and Hacker-Pschorr.

3) Brave Hofbrauhaus
You’ve probably heard the many outrageous stories regarding this tourist-laden cesspit. Word of blokes urinating, ripping shirts, throwing up and participating in general carnage hit the ears before you hit the plane. It’s all true. If you want to say you had the full experience, at least poke your head in. Its gleaming characteristic is that it’s the only tent allowing standing space, so if you can’t get a seat, you can still get a beer.

Top Tip — If you’re wearing underpants don’t tell anyone. When word gets out you’ll be wedgied until they rip clean off. Embarrassing and painful.

4) Eat the food
This seems a no-brainer, but undoubtedly you’ll be seeing many sloshed folk stumbling around talking gibberish by 3pm. These are the tourists that decide to consume the beer at rapid pace without realising they’re in for the long haul. Don’t be one of them. Besides, the food — sausages, pork, bread etc — is the perfect compliment to beer drinking.

Top Tip — Buy bratwurst from the many carts that litter the festival ground. You won’t be disappointed.

5) Tip your waitress
Can you imagine working long hours carrying heavy mugs while dealing with drunken punters and watching everyone else have fun? Maybe, but this isn’t your average Walkabout and a kind gesture to the woman distributing the amber stuff will only help you get served faster next time. Sometimes it pays to be nice.

Top Tip — The majority of waitresses are heavy-set 40-somethings. Tip them regardless and don’t be a chauvinist.

6) Test your luck with a local
Honestly, out of all the memories you can take away from Oktoberfest, surely kissing a stunning Bavarian in a Dirndl would rank fairly highly. Or, locking lips with a burly German in Lederhosen may be your thing. Either way, there’s no reason not to get amongst it, which leads me to the next point…..

Top Tip — Germans are pretty straight forward people, so you’ll know where you stand. If you get somewhere, let us know.

7) Befriend the Germans
If Todd and Claire from Brisbane are the only friends you made at Oktoberfest, then something is seriously wrong. All the tents are filled with friendly locals happy for you to join them at a table. In fact, you probably won’t have a choice, as the tables are long and when you’re battling with thousands of others, it’s unfeasible to suggest you’d get a spot with all your friends. Go on, branch out.

Top Tip — Treat it like a boozy Wagamammas without the Oriental fare. Your neighbours expect the chat.

8) Jump on a ride
What fun is a festival without rides? Oktoberfest has a wide selection ranging from the horribly lame to the reasonably daring. The best are easy to find – they have the largest queue and are accompanied by hundreds of shrieks and screams.

Top Tip – Unless you plan to heave a gutful of beer and hearty German sausage onto the masses, select your ride carefully.

9) Steal a Stein
Ok, this is slightly immoral, but you’ll definitely contemplate it. In recent years Oktoberfest security has clamped down on Stein stealers by issuing significant fines and by checking bags. That said, the risk fuels the enjoyment. There is something strangely fulfilling about obtaining a genuine Stein from a tent you drank at.

Top Tip — Most tents sell Steins at a very reasonable price — much cheaper than a fine. Buy one and you won’t look like a tool being caught for petty theft.

10) Be a great ambassador
With so much alcohol and revelry it’s easy to envision a complete blow-out, and they happen to the best of us. But, please consider the vast amount of Australians, New Zealanders and South Africans that travel to be a part of this great festival, and understand that your behaviour reflects on your country.

Image: By Rado Bahna via WikiCommons