The Demons and the Hawks took to the field for the twilight bounce with a first for AFL London - Women’s AFL London’s Lisa Wilson and Kate Grabowski had whistles in hand, ready to umpire the Premiers match.

Friday night AFL football, whilst a weekly occurrence in Australia, is a rare event here in London. Due to the ever-present social calendar of AFL London clubs, the Wimbledon Hawks hosted the currently undefeated Wandsworth Demons at Motspur Park, in order for the Epsom Derby to be enjoyed by both teams.

With this match coming off the back of the announcement of the first 18 Great Britain players for the AFL Europe Championships this coming August, five newly picked Bulldogs were showcasing their skills. 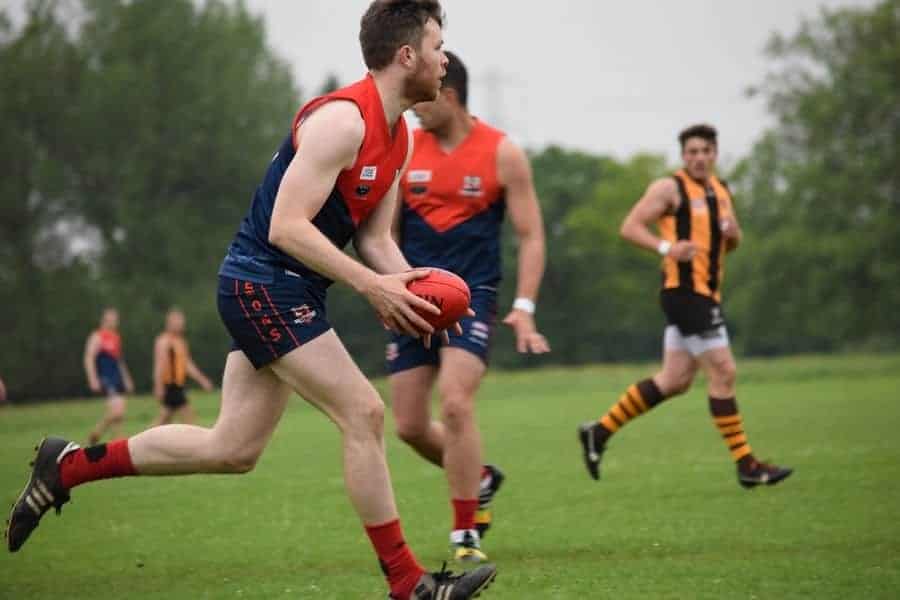 Wandsworth Demons had one of the fresh Bulldogs, Alex ‘Nic Nat’ Watson who has been killing it in the ruck for the Demons over the past 18 months since discovering Aussie Rules.

The Hawks boasted the other four players, including captain, Jason Hill. Hill only started playing the sport a mere 9 months ago and has risen through the ranks at lightning speed. Premier Captain, Great Britain team manager and all around footy fiend, Hill can be described as passionate at the very least. Hastie, Cashman and Hudson were also switching back into their Hawks kit after being named in the first 18 of 30 Bulldogs participating in the triennial tournament.

The teams took to the field for the twilight bounce with a first for AFL London – Women’s AFL London’s Hawk’s and Demon’s Presidents, Lisa Wilson and Kate Grabowski had whistles in hand, ready to umpire the Premier’s match. With absolutely no doubt in these two’s abilities, being two of the most involved and passionate women involved in the sport abroad, the quality of umpiring was stellar and a small taste of what is hopefully to come. 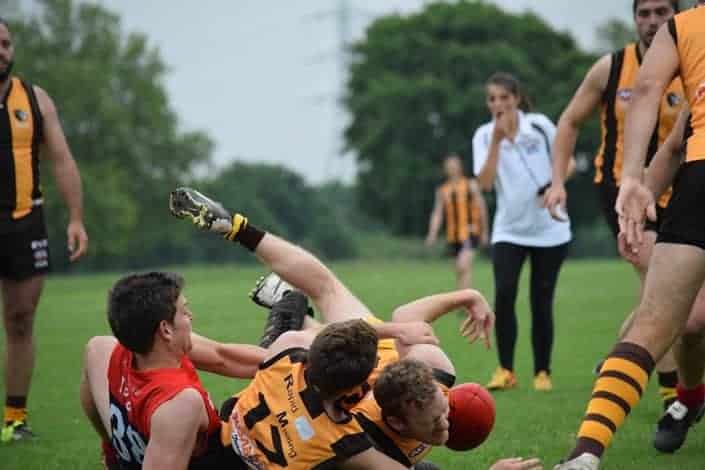 The Demon’s brought it from the starting siren kicking 18 goals to Wimbledon’s five for the match, with an impressive six from Andy Smith – taking him up to 12 for the season thus far. Whilst the Hawks had some impressive defensive pressure from Captain Jason Hill, the Demons were too good. Demon’s Stewart, Durance and Fitzgerald worked well through the midfield; a few good shepherds and plays down the middle saw the ball land comfortably in Rouse and Smith’s hands time and time again.

Bell seemed to be all over the ground like a rash while, fellow Englishmen, Nic Nat and Cooney showed their worth. Nic Nat was unassailable in the ruck and Cooney managed to bag two under the watchful eye of his opponent Hill.

It wasn’t all negative for the Hawks. A few moments of play that showed immense potential were seen, with a few offensive pushes allowing them to crack into their forward fifty. With new Bulldog Hastie slotting a major in the third, the EUs were extremely prominent despite their lesser experience. Unfortunately, much to the Hawks’ avail, the Demons were stronger and able to capitalize on the mistakes too easily.

After missing out on making it into the 2015 AFL London Grand Final by a solitary goal, the Demons are most definitely back with a vengeance in 2016. Still undefeated, they’re the ones to be watching this season – especially as they take on the West London Wildcats again this coming weekend.