AFL LONDON: With the conditions emulating that of a mid-winter game in Melbourne, the scores were low and the mud was thick.

Peckham Rye Common and the South East London Giants played host to the 2016 AFL London Pre-season Cup at the weekend. With the conditions emulating that of a mid-winter game in Melbourne, the scores were low and the mud was thick.

Kicking off at 10am, there were 33 games played on the common with three pitches running and four pools. Included were the first ever Supers pool, giving a playing ground to those over 35, as well as an exceptionally strong women’s pool. The remaining two pools were made up of AFL London clubs and a rep team from AFL Central Northern England.

An excellent show was put on with the Wandsworth Demons coming away with the inaugural Supers Cup and the Great Britain Swans beating the Aussies at their own game by winning the Women’s silverware.

The West London Wildcats topped Pool A to head straight into the Grand Final, leaving 2nd place in Pool A, the Wandsworth Demons, to play off against the top of Pool B, the London Swans. 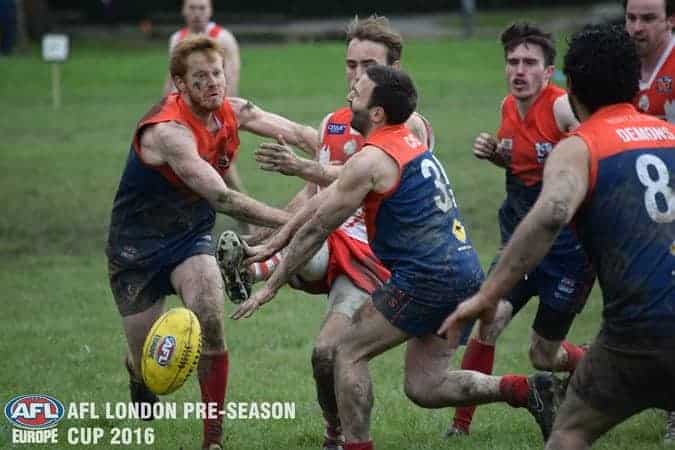 The thriller of the semi final had the Demons go through to the Grand Final, 1.0.6 to 0.3.3, to take on their old time rivals, the West London Wildcats.

With the conditions just slightly warmer than the predeceasing matches, the Wildcats and the Demons we’re both fighting for their second 2016 Pre-season trophies. The Demons were coming off their Leprechaun Cup win in Belfast while the Wildcats had bagged their second AFL Europe Champions League trophy. Tensions were high and uniforms were barely recognisable with a multitude of mud, as the teams faced off.

Being knocked out in the first minute didn’t slow down centre-halfback, Nathan Stewart, who shone for the Demons. While zippy forward Keith Della-Vedova gave it a good crack for the West London boys.

Despite the awful conditions the Wildcats managed three goals to the Demons one, bagging the silverware 3.3.21 to 1.0.6.

The after-game festivities kicked on in the marquee on the common, sponsored by Belushi’s Bars and well put together by the South East London Giants.