Australian cricketer David Warner has pled guilty to ‘unbecoming behaviour’ after punching England batsman Joe Root at Walkabout nightclub in Birmingham. He has been fined $11,500 and suspended from the remainder of Australia’s ICC Champions Trophy campaign. 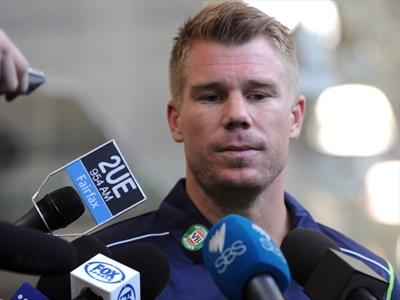 AUSTRALIAN cricketer David Warner has been suspended by Cricket Australia until the first Ashes Test for his unprovoked attack on English batsman Joe Root at the Walkabout in Birmingham.

The suspension means Warner will miss the remainder of Australia’s ICC Champions Trophy campaign, as well as the Australian team’s two tour matches before the first Ashes Test, against Somerset and Worcestershire. He has been fined AUD$11,500 over the incident (almost £7,000).

Warner will be eligible for selection for the first Test of the Ashes.

The incident occurred in Birmingham following England’s victory over Australia at Edgbaston on Saturday, when both Joe Root and David Warner were at Walkabout nightclub with teammates.

Rumours have circulated on social media that Warner reacted to Root wearing what’s been described as a Hashim Amla wig or mask.

Amla is a Muslim cricketer from South Africa.

However, England issued a statement saying the altercation was unprovoked.

“The England and Wales Cricket Board confirms that David Warner initiated an unprovoked physical attack on a member of the England team in a Birmingham bar following England’s 48-run victory over Australia,” the statement said.

“Warner has admitted behaving inappropriately and has since apologised to the player involved who has accepted the apology.

“Following a full investigation the England team management has concluded that the England player was in no way responsible for nor retaliated to the attack.”

Joe Root was not injured in the encounter and was training with England teammates at the Kia Oval yesterday.

A statement released on behalf of Walkabout suggested none of the players had been drinking excessively and that Warner, who was said to be known to staff at the venue, paid the bar tab.