Tennis to burn; Melbourne heats up for the Australian Open

Winning the Australian Open may be the ultimate goal, but the world's best tennis players are more interested in keeping cool as they compete in Melbourne's extreme heat. 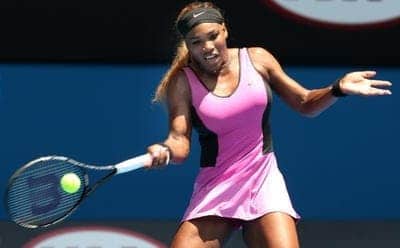 MELBOURNE is heating up quite literally with the action on the court at the Australian Open set to be hotter than ever over the next two weeks.

The world’s best players, including tournament favourites Novak Djokovic and Serena Williams, will be starring on the courts of Melbourne Park in the first of the year’s four Grand Slam events and the tennis is sure to be red-hot.

But it is not only the world’s best tennis stars that are burning up the famous blue hardcourts of Melbourne Park — temperatures of 40+ degrees Celsius are burning down too to make this year’s Australian Open a battle of attrition.

World number two Novak Djokovic is bidding to lift the title in the Rod Laver Arena for the fourth year in a row having beaten Andy Murray twice (2011 and 2013) and Rafael Nadal (2012) in the last three finals.

Nadal, having missed last year’s tournament because of injury, is back for another tilt at the Australian Open, which he won for the first and only time in 2009, while Murray is out to break his duck after two near misses. Juan Martin Del Potro, David Ferrer, Stanislas Wawrinka and four-time champion Roger Federer add to a wide-open men’s singles draw.

The women’s singles title appears to be at the mercy of Williams, who is a red-hot favourite to add to her glittering resume having proved nigh on impossible to beat in the big tournaments including when warming up with success in Brisbane.

The last of her four Australian Open titles, however, came back in 2010 and it has been Victoria Azarenka who has been the darling of Melbourne for the last two years, comprehensively beating Maria Sharapova in 2012 before battling to defeat Li Na 12 months ago to making it back-to-back triumphs. They remain the Belarusian’s only to Grand Slam titles.

Once again, hopes of a home victory will fall onto the shoulders of Queenslander Sam Stosur. The 2011 US Open champion has, however, never made it past the fourth round of the Australian Open in 11 attempts and will need a dramatic improvement if she is to achieve the lifelong dream victory in Melbourne.

Gary Emmerson is editor of Bettingpro.com.au, the leading sports and betting website.