Ricky Ponting is eyeing off a career renaissance and Michael Clarke the highest individual score ever posted at the SCG, after Australia destroyed Indian hopes with a batting masterclass on day two of the second Test. 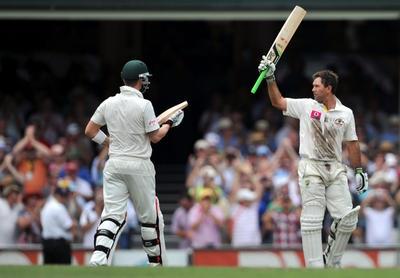 RICKY PONTING is eyeing off a career renaissance and Michael Clarke the highest individual score ever posted at the SCG, after Australia destroyed Indian hopes with a batting masterclass on day two of the second Test.

Australia lost just one wicket for 366 runs on Wednesday, and will resume on 4-482 with Clarke 251 not out and Michael Hussey 55 – their partnership unbeaten on 157.

The first innings lead is already 291 after India managed just 191 on day one, and the tourists are now facing an uphill battle to save the match and keep alive their dream of winning a maiden series on Australian soil.

The landmark 100th Test played at the iconic Sydney ground was assured its place in the record books after the under-siege Ponting broke a two-year century drought with a triumphant innings of 134.

He shared in a record 288-run stand with his skipper, before Clarke took centre stage, with 300 now in sight.

His brilliance would have stood alone under ordinary circumstances, but Clarke’s heroics were forced to take a backseat to his predecessor’s revival.

Ponting will be 38 when the next Ashes chapter takes place in 2013 and the all-time great made it clear he has no intention of calling it quits anytime soon after his first ton since January 2010.

“Confidence is an amazing thing. I’m a pretty proud person and the last thing I wanted to do was finish off my career the way I’ve been going the last few months,” he said.

“That’s why I’ve worked as hard as I have. I love the contest too much to give it all up.

“There’s nothing else personally I’m striving to achieve other than being able to help the Australian team win games and get back up to the top of the tree.

A direct hit would have removed the 37-year-old on 99, but finally, after the rockiest period of his fabled career, luck finally returned to Ponting and his awkward dive saw him home as the ball flew past the stumps.

“You saw the shirt is pretty much destroyed and my grill was pressed against my face and I was spitting out pieces of the wicket so I could try and smile. There was grass down the front of my pants and all sorts of things,” said Ponting post-match.

Captain Clarke breezed past his previous highest Test score (168), notched his first double ton, eclipsed Doug Walters’ Australian record of 242 at the SCG in 1969 and is now closing in on the overall mark of 287 set by England’s Reginald Foster in 1903-04.

Clarke was given a cool reception when he deputised for Ponting as captain in last year’s disastrous Ashes Test in Sydney, but 12 months later he received a standing ovation for what could be a career-defining knock.

“I never set out to make 250, it was just about batting for me today. It was about building the partnerships,” he said.

“It’s fantastic to have a score before my name like I do but .. if you don’t win the Test match it means nothing.” – AAP