PHOTO GALLERY | The mighty fighting Hawks claimed victory over the Fremantle Dockers in the 2013 AFL Grand Final. Australian Times were at one of the many venues across London screening all the live action from the MCG. Check out our photos from the party at the Bloomsbury Bowling Lanes.

by Thomas Jones
in Sport 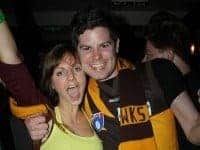 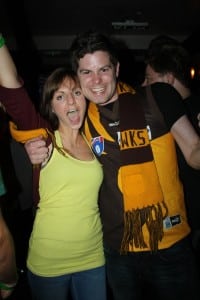 Check out our photos of the 2013 AFL Grand Final Party at Bloomsbury Bowling Lanes here.

THEY were a happy team at Hawthorn after defeating the Fremantle Dockers in the 2013 AFL Grand Final.

The Dockers, who were playing in their first grand final, did not go down without a fight. In the third quarter, they booted four of the first five goals to come within three points of their opponents.

But ultimately Hawthorn’s experience and precision kicking saw them take the heat, and respond to all of Fremantle’s contests with answering shots.

The final score-bored was Hawthorn 77 to Fremantle 62. This is the Hawks 11th premiership.

All the action from the MCG was shown live at venues across London in the early hours of Saturday morning.