James Pattinson ruled out of Ashes series with back injury

Another Ashes setback for Australia after fast bowler James Pattinson ruled out of the rest of the Ashes series with a back injury. 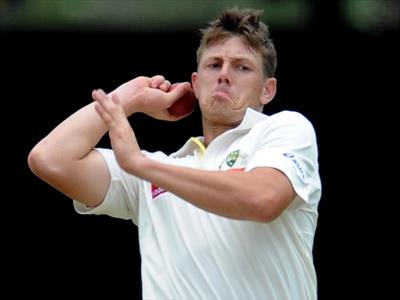 ONLY 24 hours after Australia’s crushing 347-run defeat at Lord’s in the second Test of the 2013 Ashes series, the team have suffered another blow.

Fast bowler James Pattinson has been ruled out of the rest of the tour with a stress fracture in his back.

The 23-year old reported some hip and back soreness on the final day of the second Ashes Test at Lord’s. He went on to take two for 137.

“We had some scans done today in London that have identified an early stage low back stress fracture. Unfortunately he will not take any further part in this Test series and will commence a rehabilitation program with the aim to have him back for the Australian summer,” said team doctor Peter Brukner.

Australia have not named a replacement, however Cricket Australia Team Performance General Manager Pat Howard said they were considering a number of players as an alternative.

“While we are obviously disappointed for James, the selectors have five bowlers fit and ready perform in England, providing them with many options,” he said.

“We’ve been well planned to have as many bowlers fit and available in the lead-up to this important series and while this set-back for James is disappointing, we are confident we have good fast bowling depth.”

Fawad Ahmed, the Pakistani leg-spinner recently granted Australian nationality, is a potential option. He is currently in Zimbabwe with the Australia A squad.

After making a spectacular debut at Trent Bridge in the first Test, 19-year-old Ashton Agar has also succumbed to injury, requiring treatment on his hip at Lord’s. He is doubtful for the third Test, making it more likely coach Darren Lehmann could call up Ahmed for a Test debut.

Pattinson will stay on with the squad, travelling to Sussex and then on to Manchester before returning to Australia.