The London tag rugby community are eagerly awaiting a cracking week of finals to see which teams will be crowned the early summer season champions. 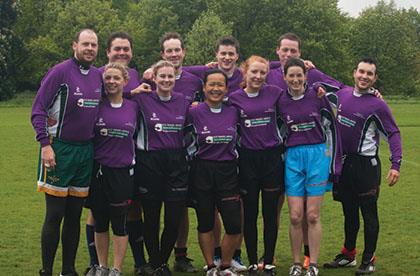 THE London tag rugby community are eagerly awaiting a cracking week of finals to see which teams will be crowned the early summer season champions.

The first finals to take place are at Balham on Tuesday with the Frosties taking on Hashtag in the A grade, Tag Me Maybe vs Poice in the men’s grade, Jarrod’s Dating Dino’s Vs God Loves A Tagger in the intermediate grade & The Sexy Rides facing A Try for A Try in the beginner grade final.

Across at East London also on Tuesday, the final will be fought out between East London RFC A and East London RFC, whilst over at Shoreditch, SoyBreastMilk will face Hackney RFC in the intermediate grade final with Cereal Killers Vs Problems in the beginner grade final.

The Canada Water super league final will be contested by The Chargers and Tagquila Shots with the winner claiming bragging rights as champions of the strongest league in London. Finals are also taking place at Highbury, Richmond and Southfields this week.

All teams that make an A grade final across London will be invited to take part at the 2013 London Tag Rugby Championships in the champion’s league to see who will be crowned the best tag rugby team in London. Teams which don’t make an A grade final can still enter this prestigious event in the men’s or social divisions. The 2013 London Tag Rugby Championships will be held on Saturday 17 August at the East London Rugby club in West Ham.

Meanwhile, Try Tag Rugby’s summer leagues commence from 25June onwards at 15 venues across London and Reading. Due to the successful Fulham league which sold out in its first season, Try Tag Rugby are introducing a second evening (Tuesdays) at Fulham.