Australia are in trouble on day one of the first Test, after another batting collapse against England. 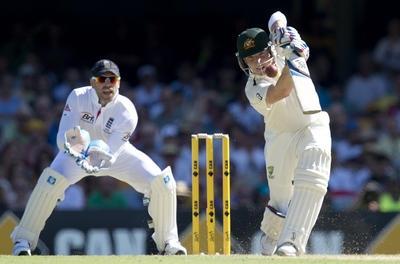 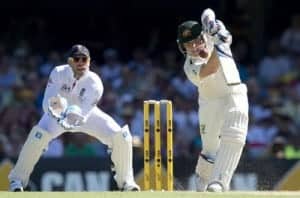 Michael Clarke’s side are against the ropes just two sessions into the return Ashes series, after butchering a strong start to lose 5-61 on day one at the Gabba.

At tea Australia were 6-153, with Brad Haddin (24 not out) and Mitchell Johnson (12no) left to try and build a respectable first innings total.

Coach Darren Lehmann pledged to pick and stick with the batting order this series, but his plan could be severely tested after just one Test following a run of soft dismissals.

Captain Michael Clarke had no hesitation in winning the toss and electing to bat on a belting Gabba pitch, but optimism soon turned to disaster.

David Warner (49 from 82) showed intent from the first ball he faced from Stuart Broad, taking the fight to England early.

But the turning point came on the stroke of lunch, when England’s villainous fast bowler fought back from a jeering crowd and Warner’s boundaries to dismiss Shane Watson and kick-start a devastating fightback.

Broad took 4-35 to make an emphatic statement after a week of intense pressure, stemming from his controversial decision not to walk in the last series in the winter.

Opener Chris Rogers had no time to settle in before he copped a beauty from Broad, edging into the gully for 1.

Watson and Warner put on 59 before the horror show began when Australia’s No.3 prodded at one outside off-stump, edging to Graeme Swann at second slip.

Clarke became his third victim shortly after the lunch interval, with Broad claiming the Australian star for the sixth time in the past eight innings.

Clarke has struggled to handle the Broad short ball and popped one up to Ian Bell at short leg.

Debutant George Bailey lasted just 15 balls before edging Anderson behind for 3, and Steve Smith gave Chris Tremlett a scalp when he nicked one to slip for 31.