Australia wrap up big cricket win over India at SCG

Australia claimed an innings and 68-run win over India at the SCG on Friday to take an unbeatable 2-0 lead in the four-Test series. 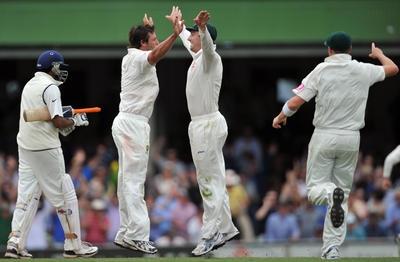 AUSTRALIA claimed an innings and 68-run win over India at the SCG on Friday to take an unbeatable 2-0 lead in the four-Test series.

Inspired by a five wicket haul to rejuvenated paceman Ben Hilfenhaus (5-106), Australia ripped through India’s middle-order to dismiss the tourists for 400 in their second innings and wrap up a comprehensive four-day victory in the SCG’s landmark 100th Test.

The Indians, resuming on day four at 2-114 and needing a further 354 runs just to make Australia bat again, might have thought they were about to mount a remarkable comeback, after Gautam Gambhir was the only wicket to fall on the fourth morning.

The opener was caught by David Warner, off the bowling of Peter Siddle (2-88) for 83, but India put together their best batting session of the tour to add 129 runs and reach lunch at 3-243.

But Australian captain Michael Clarke (1-22), scorer of an unbeaten 329 in Australia’s mammoth 4(dec)-659, opened the floodgates when he ended a 103-run stand between Sachin Tendulkar (80) and VVS Laxman (66) shortly after the lunch break.

Tendulkar edged a Clarke spin delivery, which bounced off Brad Haddin’s gloves and into the grateful hands of Michael Hussey at first slip to keep the ‘Little Master’ waiting for his 100th international hundred.

Despite the disappointment of again missing out on three figures, Tendulkar received a standing ovation, in what is almost certain to be his last Test appearance at the SCG.

That breakthrough made, Clarke handed the second new ball to Hilfenhaus, who promptly removed Laxman with a peach of a delivery that clipped the Indian veteran’s off-stump.

Dhoni was caught and bowled by the impressive Hilfenhaus, before the out-of-sorts Kohli was trapped lbw by young gun James Pattinson (1-106).

Tail-enders Zaheer Khan (35) and Ravichandran Ashwin (62) added a lusty-56 for the eighth wicket to take the game past tea on day four, but it just delayed the inevitable.

Ishant Sharma (11) hung around long enough for Ashwin to pass 50, before being trapped lbw by Nathan Lyon (1-64), before Hilfenhaus wrapped up his second five-wicket haul in as many Tests and the match by dismissing Ashwin.

The series moves to Perth for the third Test starting at the WACA Ground on January 13.

Former Australian captain Ricky Ponting, who broke through for his first Test hundred in two years in the first innings, said the team had plenty to celebrate.

“Michael Clarke’s innings was amazing and Huss and everyone chipped in and today was a lot of toiling for the bowlers,” Ponting told Channel Nine.

“But I think it says a lot about our bowlers to keep coming back and put in the way we did.

“They’re young blokes who are finding their feet at Test level, but they just keep getting their job done and getting the results.

“It’s a very happy team – it always is when you’re winning and we’ve had a couple of good weeks, but we will celebrate like we should.

“I think it’s important you celebrate these sort of wins, especially when it’s been as emphatic as this one has been.”

Former prime minister Bob Hawke was even celebrating Australia’s dominant display with a return to his famous drinking form.

“We’ve won two Test matches – we haven’t won the series yet so there’s still a lot of work to go in. That starts tomorrow.”

Clarke hasn’t lost any of the four series he’s skippered so far, but the bottom line is he only has one victory to show for it.

Recent draws against South Africa and New Zealand have him desperate to ensure Australia keep the blowtorch on India, starting with the next Test at the WACA Ground in Perth from next Friday.

Australia’s batsmen declared at 4-659 in the first innings, but Clarke said the much-improved bowling attack deserved most of the credit.

“Our bowlers are having success in completely different conditions,” he said.

“When there’s a bit in the wicket on day one the boys bowled really well and we managed to get India out for a very cheap score.

“But that wicket out there today is as flat as you’ll get and to be able to take 10 wickets I think that’s really pleasing for our attack.

“We have wicket-taking bowlers … and we’re able to build up pressure.”

Australia’s emphatic win was later soured when 21-year-old paceman James Pattinson was ruled out for the remainder of the series due to a left foot injury.

Pattinson has been cleared of stress fractures but x-rays revealed he’s developed the early stage of a stress-related bone trauma in his foot.

Selectors say they were contemplating resting Pattinson anyway for the WACA Test, but his 25 wickets at 18.12 in four matches will be difficult to replace.

However for Clarke, born and bred in Sydney, it’s safe to say he will never forget his colossal performance in the 100th Test played at the SCG.

At stumps on Thursday, he was peppered with questions about what it was like to break the ground record score and be the newest member of the exclusive 300-club.

But Clarke was focused on nothing but victory.

“I’m really stoked with our performance and it’s a wonderful feeling to be able to score that many runs in one innings, personally,” he said.

“It’s the first series I’ve been full-time captain in Australia in front of my home fans, so it was important I stood up.” – AAP