Australian T20 captain George Bailey says his team need to turn around the perception they’re underachievers in the short form. 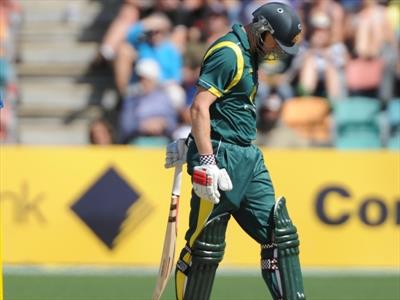 Ranked third in both Test and one-dayers, Australia’s numbers drop dramatically when it comes to the game’s shortest form.

As Australia prepare for Saturday night’s clash with Sri Lanka at ANZ Stadium in Sydney, George Bailey’s team are ranked a lowly seventh in T20, with only minnows New Zealand, Bangladesh, Ireland and Zimbabwe beneath them.

Captain Bailey concedes his side are underachievers.

However, the good news is the fickle nature of T20 cricket extends to the rankings points.

Two wins against Sri Lanka over the Australia Day weekend and victory in a one-off clash with West Indies next month would see Australia rocket into the top four.

If a few other results around the world went their way they could potentially be the No.1 side by the end of February.

“I certainly think we are underachieving in T20 cricket more so than in any of the other formats,” Bailey said on Friday.

“There’s no reason why with the players we have and the depth we have we shouldn’t have a side that are consistently in the top couple of teams in the world.

“That’s something that still irks me.”

In a format which is more about entertainment than results, Warner provided an all-time highlight last summer at ANZ – when he smashed a screaming switch-hit for six down the ground.

But Bailey said the best entertainment still comes from winning.

Bailey said “small adjustments” would have to be made by batsmen coming out of the ODI series, and called on his troops to play with intelligence – despite the temptation to do otherwise.

“It’s the same game just with accelerated decision-making and upping the ante a little earlier. But I don’t think there will be too much in terms of new shots. I certainly don’t have that up my sleeve and I think that goes for most of the players,” said Bailey.

However, the skipper concedes Warner doesn’t come under the “most players” category.

“His switch hit last year is still very vivid in my memory. More so because I’m not sure I could hit a ball that far right-handed. It’s pretty impressive,” Bailey continued.

“He’s someone we want to give that freedom to.

The x-factor for Sri Lanka is mystery spinner Ajantha Mendis – although it’s unsure how much of a mystery his leg-breaks are these days.

New Sri Lanka captain Angelo Mathews says he and most of his teammates can pick Mendis in the nets, and Bailey gave an emphatic “yes” when asked if he can read the 30-year-old’s bowling.

Mathews is confident Mendis will shine on an ANZ pitch which has proven slow throughout the Big Bash.