Australia have regained the Ashes with victory in the third test against England in Perth. 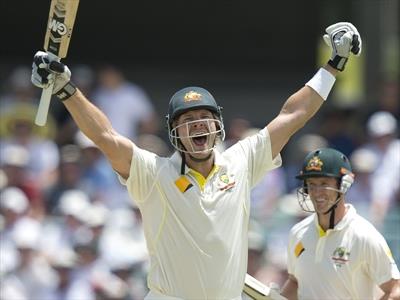 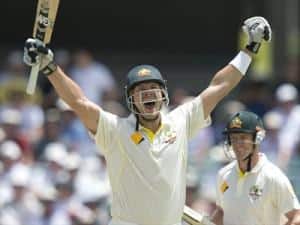 AUSTRALIA have put the pain of three straight Ashes-series defeats behind them, crushing England by 150 runs in the third Test to regain the urn.

Skipper Michael Clarke’s men needed just 14 days of the five-match series to win back Test cricket’s most famous trophy, which England have held since 2009.

Click here to read A golden era of English cricket comes to an end.

Kiwi-born youngster Ben Stokes led England’s brave resistance with 120 off 195 balls as the second-gamer notched the tourists’ first century of the series.

Australia bowled England out for 353 in their second innings in the post-lunch session on the final day of the third Test at the WACA Ground.

Mitchell Johnson (4-78) and spinner Nathan Lyon (3-70) led the way for the Australian bowlers.

Prior was out caught behind to a wide ball from Mitchell Johnson.

Stokes top-edged a bouncer from Johnson to the fine-leg boundary to notch his maiden hundred off 159 balls.

Lyon claimed the key wicket of Stokes caught behind in the third over after lunch at 7-336.

The 22-year-old left-hander went for a big sweep shot and departed after hitting 18 fours and one six in more than four hours of batting.

Lyon struck again in his next over when Graeme Swann was caught at bat-pad for four.

Stuart Broad, limping because of a bruised foot sustained while batting against Johnson in the first innings, joined Bresnan.

Bresnan popped a catch to mid off where 36-year-old Chris Rogers held a fabulous diving attempt to his right at 9-349.

Jimmy Anderson, so often Australia’s Ashes tormentor in recent times, was last man out for two.

Australia put themselves in a strong position on Monday as Shane Watson smashed 103 in the home side’s second innings of 6(dec)-369.

Watson is a veteran of Australia’s past three losing Ashes series, along with Michael Clarke, Brad Haddin and Peter Siddle.

“We got them back so it feels amazing,” Clarke said.

Clarke said his side’s celebrations would not cause them to lose focus on the challenge of sweeping England.

“Our goal is to get back to being the number one team in the world. But we’ve got two more Test matches and we’d love to go five-nil up in the series,” he said.

Australia can rise from fifth to third by winning the final two Tests and securing a five-nil result.

Left-arm quick Johnson has taken 23 wickets at 15.47 in the series, including man-of-the-match performances in the first two Tests.

“I wouldn’t be surprised if he got man of the series,” Clarke said.

Clarke said Australia’s losing campaign in the UK series in 2013 had been a tough time.

“We went through what England’s going through now not long ago in the UK,” Clarke said.

“We had a tough time of it in the UK and copped a lot of criticism, but we also had a lot of support. For those people who have stuck by us, thank you.”

“We knew what a good side they were in England. You’ve got to be at the top of your game to beat them, and we haven’t been there,” Cook said.

“Yes, the Ashes is gone which is going to hurt for a while.”

Steve Smith was named man of the match after scoring 111 in Australia’s first innings of 385.