Stand-in captain Shane Watson has warned Australia must rekindle their killer instinct, describing their performance in the drawn five-match ODI series against the West Indies as "very disappointing". 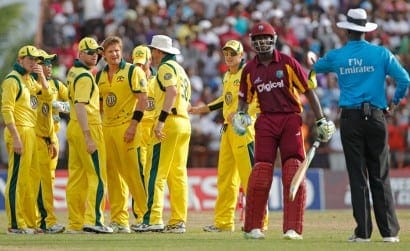 STAND-IN captain Shane Watson has warned Australia must rekindle their killer instinct, describing their performance in the drawn five-match ODI series against the West Indies as “very disappointing”.

The tourists claimed a 30-run win in Sunday’s final match in St Lucia, levelling the series 2-2 and thereby avoiding a first ODI campaign defeat to the West Indies in 17 years.

But, as in previous games of the tour, Australia allowed the Windies back into the match just when an easy victory seemed assured.

Chasing 282, the hosts’ challenge appeared finished when captain Darren Sammy strode to the crease with the score 7-118.

What followed was the innings of Sammy’s career, smashing 84 off 50 balls as he and Andre Russell (41) scored 101 off just 59 deliveries for the eighth wicket to drag the Windies back into the match.

It reflected similar moments in the series where Australia took their foot off the throat of their opponent, such as the tied third game in St Vincent where the hosts recovered from 6-117 to all but snatch a win.

This time Australia had enough runs on the board to repel Sammy’s blitz and claim victory but Watson said a more ruthless approach was required to overcome the worrying trend.

“We’re at a stage where things look like we’re cruising okay and change quite quickly,” Watson said.

“That’s happened since I’ve come back in the Australian team over the last 10 games. It’s something we certainly need to work on.

“To tie the series, especially when in a number of those games we were at a stage where we should have buried the West Indies, it’s probably very disappointing.

“It’s a big learning curve for us. We have to get better at those stages because that’s where we are really going to grow as a team.”

Watson hands over the captaincy to George Bailey for the two-match Twenty20 campaign beginning in St Lucia on Tuesday, and he expects it to be just as competitive as the ODIs.

“They’ve got a very good Twenty20 team as we do,” Watson said.

“I think it’s just going to continue to be a great series.”

Sammy too was ruing missed opportunities after his team just failed to secure the Windies’ first ODI series win over Australia since 1995.

The allrounder was the man run out when Australia snatched the tie in the third match of the series and he admitted that moment would probably haunt him.

“Every time I close my eyes, this series will reflect in my head and no doubt St Vincent will definitely come to play,” he said.

“We hadn’t won a match against Australia since 2006 and to come out there and play, compete and we should have won, it’s good for the team.”

The first T20 match begins at the Beausejour Stadium on Tuesday. – AAP