Australia can eclipse England in Windies

It seemed impossible 12 months ago but Australia can overtake England in cricket's Test world rankings if results go their way during the series against the West Indies starting this week. 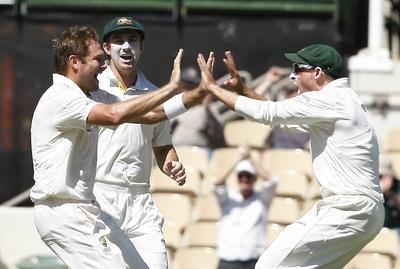 IT seemed impossible 12 months ago but Australia can overtake England in cricket’s Test world rankings if results go their way during the series against the West Indies starting this week.

Australia plummeted to fifth in the world after last year’s home Ashes humiliation while England were on a climb that took them to No.1 following their mid-year thrashing of India.

Since then Australia have risen steadily under new skipper Michael Clarke’s leadership, as England were swept 3-0 by Pakistan in the UAE before another defeat in the first Test in Sri Lanka last week.

England must now win the second Test in Colombo to avoid another series defeat and the loss of the top ranking to South Africa. A defeat would open the door for Australia to also move above the old enemy.

A 3-0 series sweep in the West Indies would then move Australia into second on the rankings, above India and England.

It’s a scenario that appeals to former skipper Ricky Ponting, who has made it his goal to regain the Ashes in England next year.

“It goes to show we’re on the right track to turning our cricket around and probably goes to show that England might have been at the start of the end of their cycle,” Ponting told AAP.

“It’s really hard to stay up and dominate international cricket as long as we did a few years ago.

“England have got a taste of it up there for a little bit and have started to struggle a bit in their last couple of series.

“When you’re up the top and you’ve got everyone trying to chase you, it’s hard to maintain that.”

A lot has to happen that rankings scenario can play out and Ponting warned his teammates not to get ahead of themselves, insisting they treat the Windies with respect ahead of the first Test in Bridgetown starting on Saturday (Sunday AEST).

“You’ve got to give the Windies credit for what they did in the one-dayers and T20s here but I guess by the end of the Test matches we’ll have a better idea of where they’re at,” he said.

“That’s a big part of my job in the next few days, to make sure we don’t get too carried away with things and prepare as we would for one of the powerhouse nations in world cricket.”

Ponting is also aware his return to form with the bat in the 4-0 series win over India in the domestic summer will quickly dim in memory unless he can back it up in the Caribbean.

The 37-year-old scored 544 runs and two big hundreds against the Indians but his one-day axing shows he’s on limited time if his form slumps again.

“International cricket’s not about having one good series here or there. It’s about being consistent and putting performances on the board game after game,” he said. – AAP