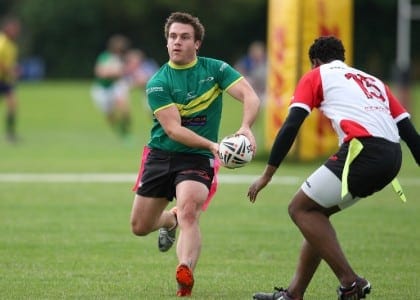 The wins will go down as two of the finest in the history of the London Australia Tag Rugby teams, overcoming the strong Great Britain & Ireland World Cup training squads in both divisions.

The London Australia mixed A Grade team, who had earlier lost to Great Britain & Ireland Red in the pool stages, won their final 7-2 thanks to an explosive first half performance by Dane Challenor. Challenor, who was basically untagable in the opening exchanges of the match, claimed the Player of the Final Award. The Player of the Tournament Award went to former South Sydney Rabbitohs Junior Rugby League representative Tim Ross, who was representing Great Britain & Ireland Red due to his British heritage.

In the men’s division, London Australia prevailed over a tough Great Britain & Ireland World Cup training squad in the final, 2-0 after both teams had shared wins in the earlier pool stages.

Meanwhile, many of the top Australian players involved in the International Cup have put their name down to tour Ireland next month for the Pig N Porter Festival. The 120 team event is the biggest Tag Rugby festival in the world and Try Tag Rugby are looking to send one A Grade and two mixed social teams. The A grade team is a great hope of winning the whole tournament, with experienced Oztag players Tom Parsons and Patrick Wright leading the way.

If you would like to get involved in Tag Rugby, visit www.trytagrugby.com for more information.