Trucks to converge on Canberra for protest

Convoys of trucks are expected to converge on Canberra next week in yet another protest against the federal government. 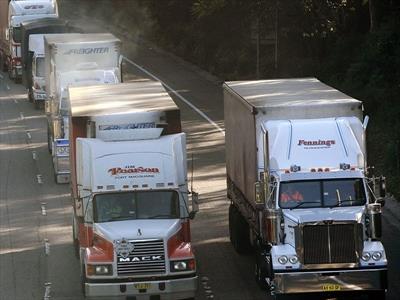 PROTEST organiser, the National Road Freighters Association (NRFA), said the convoy’s mission was to break the impasse in Canberra with a new federal election.

“In terms of this government, its integrity has been compromised by the deal it has done with the Greens and the two independents,” NRFA president Mick Pattel told AAP on Monday.

“What we are doing is sending a message to both sides that we are sick of poor government and we want someone to listen to the people.”

The trucks, involving drivers from right across Australia, will rally in Canberra next Monday and similar protests against the carbon tax and the live export of Australian livestock.

The integrity of Prime Minister Julia Gillard had been compromised following the arrangements with the Australian Greens and independent MPs, Tony Windsor and Rob Oakeshott, to keep Labor in power, Mr Pattel said.

“We want a government that has a clear mandate to govern without the influences of minor parties and individuals that are controlling the economy of this country.”

Mr Patel said councils around Australia had been brilliant in making their showgrounds and facilities available for the overnight stops on their journey to the capital.

The Australian Federal Police (AFP) said they had been satisfied with the co-operation shown by event organisers to reduce possible disruptions in Canberra.