The federal government has warned Opposition Leader Tony Abbott people smugglers are watching to see whether he "blinks" by failing to support legal changes to resurrect offshore processing. 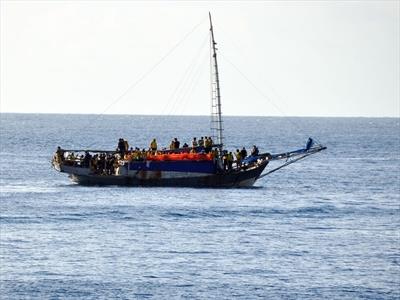 were due to brief Mr Abbott on Friday on Labor’s plans to amend migration laws to reinstate offshore processing of asylum seekers who arrive in Australia.

Prime Minister Julia Gillard needs Mr Abbott’s support to pass the changes – to be introduced into parliament next week – because the Greens have ruled out supporting them.

Mr Abbott appears unlikely to comply, but his immigration spokesman, Scott Morrison, says the coalition is keeping its options open.

“We’ll see what the legislation is today, but it’s clear that they want to embrace failed policies at the expense of proven policies,” Mr Morrison told reporters in Canberra.

“We will look at these matters and reflect on them carefully in the days ahead.”

Mr Abbott will put the legislation before shadow cabinet and the party room before announcing a final decision, Mr Morrison said.

“The Labor Party and the Liberal Party are both meant to believe in offshore processing.

“The question is, will Mr Abbott put his votes behind offshore processing?”

But Mr Abbott again signalled he would reject the changes, pointing out Ms Gillard had promised not to send asylum seekers to countries not signed up to the United Nations Refugee Convention.

“Why should the coalition help the prime minister again to break her word to the Australian people?” Mr Abbott wrote in his weekly blog on the Daily Telegraph website.

The Greens urged the major parties to end their ugly “bidding war” on which side could be crueller to asylum seekers.

“Participating in such an auction deteriorates the level of public debate in Australia and diminishes the country’s reputation internationally,” Greens’ immigration spokesperson Sarah Hanson-Young said in a statement.

In a formal submission to a Senate inquiry into the deal, the respected academics say there is extensive evidence Malaysia does not observe the rights of refugees and asylum seekers.

The government wants to use the legal changes to reinstate the Malaysian deal but argues they would also be necessary for Mr Abbott’s policy of sending asylum seekers to Nauru.

Under the Malaysian deal, Labor wants to send 800 asylum seekers to Malaysia in exchange for 4000 processed refugees.