A protest by three Kurdish men who have sewn their lips shut is continuing at Darwin's immigration detention centre. 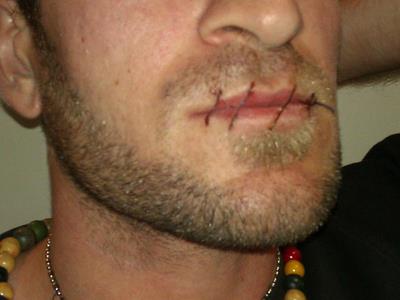 A protest by three Kurdish men who have sewn their lips shut is continuing at Darwin’s immigration detention centre.

The men began their protest on Monday, angry that they have been in detention for up to 22 months without knowing their fate.

Two other Kurdish asylum seekers allegedly overdosed and were taken to hospital.

It’s believed the men have had their applications for asylum rejected, but they cannot be repatriated because they are stateless.

Faili Kurd asylum seekers come from a region straddling the border of Iraq and Iran.

Ian Rintoul from the Refugee Action Coalition said the men were taking fluids despite their lips being shut and were not on a hunger strike.

An immigration department spokesman said the men were being monitored and had access to medical assistance and treatment.