Sea Shepherd’s confrontation with Japanese whalers has escalated in the Southern Ocean with more collisions reported. 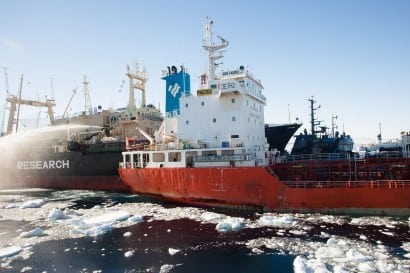 THE battle between Sea Shepherd activists and Japanese whalers has reignited with more collisions in the Southern Ocean and the arrival of a Japanese military-style ship.

Over the past week, the conservation group Sea Shepherd have had a number of ships involved in conflicts with the Japanese whaling ship, the Nisshin Maru in the Australian Antarctic Territory.

The group have stated that Nisshin Maru rammed the Sea Shepherd’s vessel Bob Barker twice on Monday afternoon, causing it to collide with the Korean tanker, Sun Laurel.

This development is in light of similar allegations raised last week where the Bob Barker stated they were forced to issue a mayday distress call after being rammed repeatedly by the Nisshin Maru and losing all power.

Sea Shepherd founder Paul Watson claims that the Bob Barker had been trying to prevent the Sun Laurel from re-fuelling the whaling vessel when it was first sandwiched in between two ships, and later rammed from behind.

Sea Shepherd says a Japanese military icebreaker, the Shirase, has arrived to assist the re-fueling operation.

The 12,500 tonne Shirase is capable of carrying 250 personnel and is operated by the Japanese Maritime Defence Force, tasked with the naval defence of the country. It is said to have used one of its helicopters to help the Korean tanker Sun Laurel gain access to the Nisshin Maru to allow it to refuel.

“The Nisshin Maru is attempting another illegal … refuelling operation in Australia’s Antarctic Territory, with a massive Japanese Naval Ship, the Shirase, available for backup,” the group’s Facebook site said.

Director of Sea Shepherd Bob Brown has once again called on the Australian Government to intervene.

“There’s 120 personnel all up from 24 countries including Australia and Japan, but they’re not armed, they don’t have military wherewithal and they’re now up against a giant military ship from Japan,” Mr Brown said.

Federal environment minister Tony Burke issued a please-explain to Japan about the ship’s role, suggesting it was exploiting a loophole by assisting the Korean tanker rather than the Japanese whalers directly.

“Japan has told the government that the Shirase is not involved in supporting their so-called scientific whaling fleet,” Mr Burke said in a statement.

“It’s true that up until now the Shirase has been probably the only large vessel Japan sends to the Southern Ocean with a genuine research role.

“But the reports today of helicopters flying from the Shirase to the South Korean tanker being used for the refuelling of the Japanese whaling fleet mean there is a further question to be answered.

“If there is no link or support to the Japanese whaling fleet, has there been a link, support or transfer of Japanese personnel to the South Korean tanker?

” …The tanker is the life blood for the rest of this disgusting operation.

“Japan needs to confirm that there is no link between the Shirase and the tanker.”

By AJ Climpson-Stewart and AAP.