Mining magnate Gina Rinehart has gathered tributes from advertising millionaire John Singleton and Indian industrialist GVK Reddy for her new book, which she is launching in Sydney on Thursday. 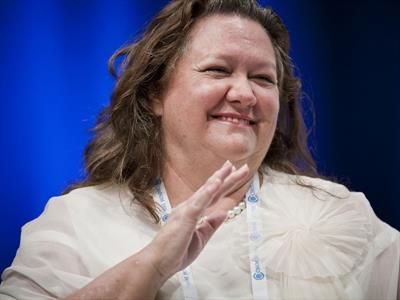 MINING magnate Gina Rinehart has gathered tributes from advertising millionaire John Singleton and Indian industrialist GVK Reddy for her new book, which she is launching in Sydney on Thursday.

The book, “Northern Australia and Then Some”, has been held in relative secrecy ahead of a two-day publicity tour by Ms Rinehart, who is chairman of Hancock Prospecting, through Brisbane, Sydney and Melbourne.

The preface describes the new tome as “a compendium of speeches, articles and images” and says Ms Rinehart “offers the reader a comprehensive insight into her thoughts about national prosperity” and an “intimate glimpse” of her life and times.

A series of photographs from the book, made available to media ahead of the launch in Sydney, show Ms Rinehart with her late father, Lang Hancock, in a number of situations including at her 21st birthday and on one of the family’s iron ore tenements in the West Australian Pilbara.

Mr Hancock wrote his own book, Wake Up Australia, to outline his vision of the essential place of mining at the centre of the nation’s economic and political future, in 1979.

Mr Singleton, in his tribute to Ms Hancock’s book, writes that people need only read two books to understand “the future of Australia and its destruction by government”.

“Read Lang’s book and it will light up your mind. Read Gina’s book and it puts our future under the brightest light I have ever seen,” Mr Singleton wrote.

Dr Reddy writes that Ms Hancock, who has been involved in a bitter court battle with her children over control of a multi-billion dollar family trust, is “a caring and loving individual .. who cares not only about the wellbeing of her family and those close to her but also about the nation”. – AAP