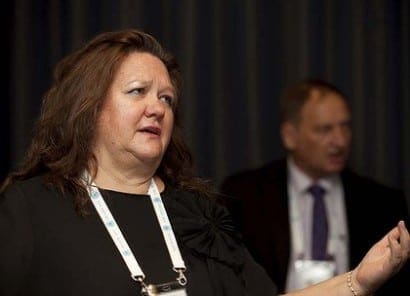 The mining magnate, who was recently named the 39th richest person in the world, gave into pressure from the corporate regulator and lodged two long-overdue annual reports for the 2010 and 2011 financial years on December 24, 2012.

Publication of the financial reports comes two months after Ms Rinehart failed in a bid to dismiss court action brought by her three eldest children, who are trying to oust her as trustee of the multimillion dollar family trust.

Details of the private company’s financial position were considered sensitive in the context of the family legal stoush.

The report, lodged with the Australian Securities and Investments Commission (ASIC), noted that Hancock had net assets of $2.78 billion at June 30, 2011, up from $1.64 billion a year earlier.

Hancock said it conducted a certain amount of exploration and production activities as part of its 50 per cent Hope Downs joint venture with mining giant Rio Tinto.

The 2011 annual report also showed Hancock still owed Rio Tinto $83.3 million, after paying back $25 million over the 2010/11 as part of an agreement to build its latest mine under the joint venture.

“The loans relate to funds advanced to the group by Rio Tinto in relation to the funding of the group’s share of the Hope Downs project expenditure, in accordance with agreements with Rio Tinto,” the company said.

Hancock outlayed a massive $415 million in capital expenditure in the year ending June 30, 2011, up from $8.29 million in the previous year.

Income tax expenses rose from $295 million to $518 million, including $67 million in deferred tax.

The report also showed funds issued to a consortium of Korean and Japanese investors led by POSCO could be converted to an equity interest in Roy Hill Holdings’ iron ore project in Western Australia’s Pilbara region.

Hancock Prospecting owns about 70 per cent of Roy Hill Holdings, which is trying to build a large iron mine, along with railway track and port facilities.

In December, Hancock began raising up to $7 billion in debt to help fund its $10 billion Roy Hill project after the construction deadline was pushed back to mid-2013.

In a section of the report entitled Contingencies, Hancock said directors of the company were not able to assess the impact of native title claims in relation to Hope Downs.

Hancock also said it was unable to quantify if any damages could be awarded to a claim made by certain companies within the group in relations to royalties from the Hope Downs mine.

“There are no significant liabilities arising from such legal actions,” the company said. – AAP