PM, Abbott in bitter war of words on superannuation

Prime Minister Julia Gillard has described Opposition Leader Tony Abbott as an “economic simpleton” over his comments on super. 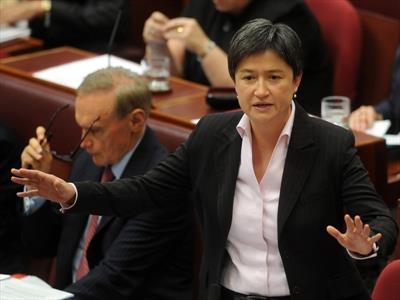 PRIME Minister Julia Gillard and Opposition Leader Tony Abbott are continuing their war of words on superannuation and each other’s economic management credentials, despite being on separate continents.

Speaking from a business forum in China, the prime minister called Mr Abbott an “economic simpleton” after his comment last week that the government’s super changes had “shades of Cyprus about it”.

On Friday, the government announced a series of superannuation reforms including a 15 per cent tax on super earnings over $100,000, a measure it says will affect only 16,000 high-income earners.

Ms Gillard said Mr Abbott’s remark was “a crazy statement that no person of reason could make”.

“This is a man who wants to be the prime minister of the country, making economically reckless statements,” Senator Wong told Sky News.

“For all my criticisms of (John) Howard and (Peter) Costello, can you imagine John Howard trying to damage confidence in the economy and in superannuation to make a political point?”

The government said on Friday the superannuation measures would save more than $10 billion over the next decade, when combined with an already announced increase to the contributions tax rate for those earning more than $300,000.

Mr Abbott defended linking the super changes to the economic crisis in Cyprus.

“It’s very important that all governments understand that money in superannuation accounts doesn’t belong to the government, it belongs to the people,” he told reporters in Sydney on Sunday.

Mr Abbott hit back at Ms Gillard’s criticism of his remarks.

“The prime minister shouldn’t use an overseas trip to make domestic political comments,” he said.

“The extreme language of the prime minister is unworthy of that great office.”

Meanwhile Senator Wong wouldn’t say whether she had pushed for bigger changes to superannuation, only to lose the argument in cabinet.

“I won’t go into that – I’m certainly never going to be one of the people that discuss what might or might not have been said in cabinet,” she said.

“It is a balanced package that does what we wanted it to do, which is look to the long term to ensure that we made the system of concessions more sustainable and we continue to build the retirement incomes of Australians, particularly low-income Australians.”

She said she supported taxing super earnings over $100,000. –AAP