The incident involving Jamie Jackson and police officers at Mardi Gras last weekend in Sydney continues to make headlines as charges are laid, new video footage emerges and a protest is held on Oxford Street. 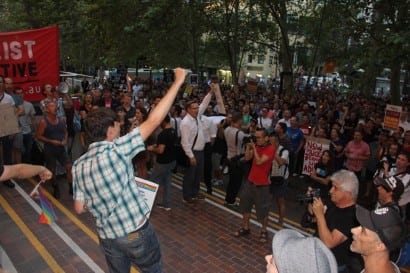 “I DIDN’T do anything wrong,” was repeatedly asserted by Jamie Jackson as he was arrested by police at Mardi Gras in Sydney. Over a million people have seen the video footage on YouTube of the handcuffed teenager being grabbed by the throat and thrown to the ground by officers.

Now new footage has emerged revealing the moments leading up to the incident which has caused worldwide outrage, attracted extensive media coverage, and prompted members of the LGBT community to organise a petition and a protest against police violence.

When the original footage was uploaded, police alleged Jamie Jackson had kicked a woman in the street, assaulted and swore at officers on duty. The new video shows Jackson kicking and punching officers as they try to arrest him.

Jackson has been charged with assaulting police and will face court next month. An internal investigation has been launched into the incident.

Despite these new developments, Independent Sydney MP Alex Greenwich, said the new footage “doesn’t change anything” and that the protest, which attracted over 2000 people, was still necessary.

“We know we need a full and thorough investigation. We need to know the whole picture,” Mr Greenwich told reporters on Oxford Street.

He also said a forum would be held next Thursday at Surry Hills police station where officers and the community could “share their concerns”.

Forty officers were assigned to patrol the march down Oxford street.

In front of the crowd gathered, Keely Snow, who witnessed the alleged bashing of Jackson during Mardi Gras says her friend is not innocent, but that police used excessive force.

“Jamie is not completely innocent and I admit that, he knows that and I know that, but that officer was in the wrong definitely,” she said.

Snow said before the video was shot the same officer that appears in the video threw Jamie to the ground “backwards by his throat” and “bashed him”.

Snow also claimed that the woman who is alleged by police to have been assaulted by Jackson, which led to the 18-year-old’s arrest, is not pressing charges and did not see what the teenager did as assault.

Jackson, who did not attend the protest, had expressed earlier on Channel 9’s A Current Affair that he had no intention of pursuing any civil action against the police officer who threw him to the ground, and that he wants the whole thing to go away.