Munich — More than just a beerfest

When people think of Munich, they think ‘Oktoberfest’. The fun, the parties, the beer. But in many an alcohol induced haze, a lot of attendees miss out on what else this amazing German city has to offer. BRENTON SHAUGHNESSY spent a long weekend in the Bavarian heartland to see the city hidden behind the beer tents. 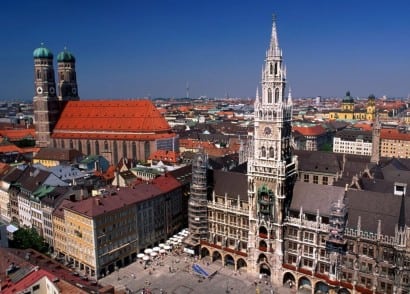 The many layers of MÃ¼nchen
Munich is a city teaming with history that dates back centuries. Unfortunately, much of the historical architecture was lost during the air raids of the Second World War but there is still plenty to see. The city has a modern cosmopolitan feel mixed with a smattering of old Bavaria. The main sights are centred around Marienplatz, the town square. Sightseeing-wise, be sure not to miss the Frauenkirche, which is the church with the huge twin bell towers that you see in all of the postcards. It was one of the few buildings to survive the war because the Allies used it as a directional landmark during their air raids. The sheer size is impressive and the towers can be seen from almost anywhere in the city. If you’re a bit of a history buff, make sure you do some research before you make the trip to Munich. The tours based on the Nazi era and wars are quite expensive, but all of the main sites can be found easily on foot. Set aside an afternoon, print off some notes with a map and meander your way around the city where Hitler drummed up much of his early support. There is much to be learnt about this terrible chapter in human history amongst these streets.

Sunbaking in the nicht
If you are lucky with the weather, do not miss the Englischer Garden, one of the largest parks in Europe. It is home to four huge beer gardens, is picturesque and quite famous for its nude sun bathers during the summer months!

If you are going to visit a museum, I recommend the Deutsche Museum. One of the largest science and technology museums in the world – we spent hours wandering around yet didn’t manage to see half of what we had wished to. A celebration of German and worldwide ingenuity, there are exhibitions on everything from space travel, boating, printing, and aviation to children’s toys, film, photography, cars and motoring.

Stein half full
Despite the tents of Oktoberfest being packed away until September, beer drinking is in the Bavarian DNA, therefore there is always a party going on. You cannot miss the opportunity to experience one of Munich’s many beer halls. Many of them date back centuries and also brew their own specialities. HofbrÃ¤uhaus offers tourists an Oktoberfest like experience all year round, complete with pretty, young beer ‘wenches’ and ridiculously large (and heavy) one litre steins of beer. Enjoy this while being entertained by a traditionally dressed MÃ¼nchen brass band. Touching on the history again (can you tell that I am a buff?), amazingly, this establishment was host to some of Hitler’s first speeches.

Older and Weisser
If you would like to avoid the busloads of tourists and dense crowds, head to Weisses BrÃ¤uhaus. During World War II the building was destroyed but has since been restored to what it would have been like in 1904.  Where the HofbrÃ¤uhaus is obviously geared towards the tacky tourist crowd, Weisses BrÃ¤uhaus has a more genuine and relaxed feel to it. The pork knuckle is amazing. Sit down, relax, and try some of the many styles of the Weisses BrÃ¤uhaus’ own Schneider Weisse beer. The more elderly and experienced beer ‘wenches’ (I hope this is a German word for ‘lovely waitresses’) working the floor also love to advise you all about the history of the beer hall, the many different types of beer available and of course their recommendations from their amazing Bavarian menu!

German fairytales
Neuschwanstein Castle is located about a two and a half hour train ride out of Munich on the outskirts of a small village called FÃ¼ssen. Despite being seen by many as a tourist trap, this is a must see. Built by Ludwig II of Bavaria in the 19th century the castle is most famous for being the inspiration for Disney’s ‘Sleeping Beauty Castle’. Photos can be taken from the Marienbruecke (Mary’s Bridge) but don’t stop there! Make sure you wear comfortable shoes for the day (this is very important), as we continued to walk on over the bridge and managed to get away from the hordes of pushy tourists. We continued up the rugged mountain side, along the thin bush tracks before we encountered some breathtaking panoramic views of the Castle, the Forggensee Lake and the Alpsee Lake. Be sure to set aside some time for a look around the town of FÃ¼ssen. A walled town with a very romantic feel to it, the streets are lined with brightly coloured buildings which house many independent retail boutiques selling everything from jewellery to souvenirs and Lederhosen. Both the castle and the town can be explored easily within the day.

What a weekend, what a city! Beerfest or no beerfest, Munich is well worth the trip.