Labor and opposition in ‘class warfare’

Three Liberal frontbenchers - Joe Hockey, Julie Bishop and Greg Hunt - were thrown out for an hour during a feisty question time in which both sides accused each other of "class warfare". 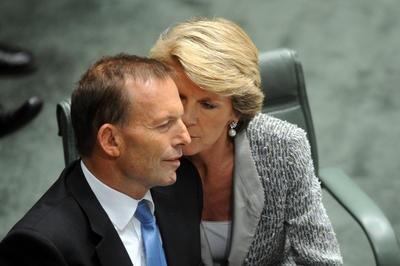 THE federal opposition has added means-testing the private health insurance rebate to a list of broken Labor promises, as the government accused Tony Abbott of preying on the misery of workers who have lost their jobs.

Three Liberal frontbenchers – Joe Hockey, Julie Bishop and Greg Hunt – were thrown out for an hour during a feisty question time in which both sides accused each other of “class warfare”.

Mr Abbott said there was a broader Labor agenda.

“The politics of envy. The politics of the class war,” Mr Abbott told parliament as he unsuccessfully attempted to suspend question time to censure the prime minister.

“That belongs back in the 1970s … and isn’t it interesting that it should be trotted out again by this prime minister who, when she is under pressure, she goes back to the days of the old socialist forum?”

Labor frontbencher Anthony Albanese told parliament it was the opposition leader who was launching a “class war”.

“This is an opposition that comes in here day after day to defend the entrenchment of privilege rather than the enhancing of opportunity.

“They have a born to rule attitude.”

Mr Abbott said the next attack on families would be cutting private school funding via the Gonski review, to be released on February 20.

The prime minister earlier in parliament accused the opposition of a “campaign of fear and misrepresentation” over the state of the economy and job losses, saying Mr Abbott was using sacked workers as “political playthings”.

Later Ms Gillard had a meeting with Australian Workers Union officials and employees from Alcoa’s struggling Point Henry smelter in Victoria, as the company reviewed the plant’s viability in the face of falling alumina prices, a high Australian dollar and rising input costs.

The prime minister gave no commitments but said she would work with the company, unions and the Victorian government during the five-month review and wanted to ensure manufacturers had a “strong future”.

The meeting came as a Newspoll showed Ms Gillard falling nine points behind Mr Abbott in terms of credibility as an economic manager.

Her economic rating has fallen by 14 percentage points since August 2010 from 48 per cent to 34 per cent, while Mr Abbott has gained three points to 43 per cent.

An Essential poll found 47 per cent of voters believed she wouldn’t be in the role at the next election, including 22 per cent of Labor voters.