Prime Minister Julia Gillard and Foreign Minister Bob Carr are at odds over the decriminalisation of illegal drugs. 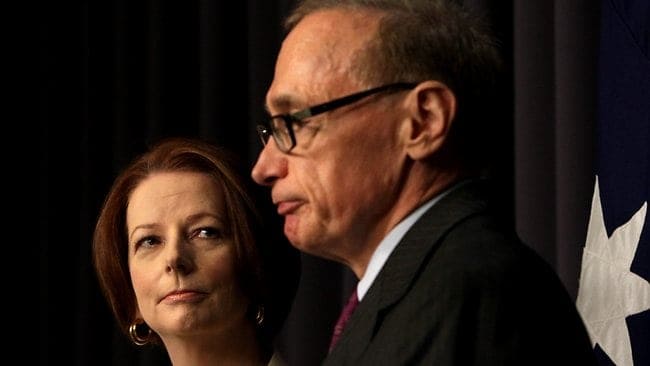 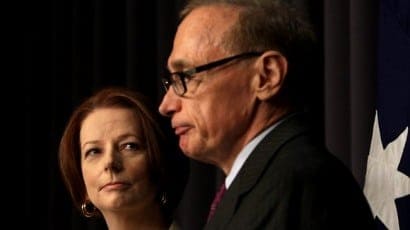 PRIME MINISTER Julia Gillard and Foreign Minister Bob Carr are at odds over the decriminalisation of illegal drugs.

Both were responding to a report by the think tank Australia21 which said the so-called war on drugs had been lost and the tough law-and-order approach was doing more harm than good.

The report, written by a group comprising former federal law enforcement officers, health ministers and premiers, including Senator Carr, said the prohibition of the use of certain illicit drugs had failed comprehensively.

By making the supply and use of certain drugs criminal acts, governments had driven their production and consumption underground, it said.

Ms Gillard said she was not in favour of decriminalising any illegal drugs.

“Drugs kill people, they rip families apart, they destroy lives and we want to see less harm done by drug usage,” she said in Sydney on Tuesday.

“So we want to make sure we are supporting people to get treatment options and we are getting our police to do what they rightly should be doing, which is policing our laws on drugs.”

Senator Carr, whose brother died of a heroin overdose in 1981, is taking a more liberal view based on his time as NSW premier.

“I sponsored a medically supervised injecting room so that people who are hooked on this wretched, addictive white powder … would have a chance,” he said.

“While they were there, you could persuade them to give the stuff up and to enter treatment to get off it.”

Attorney-General Nicola Roxon said there was insufficient evidence to support the argument that decriminalising drugs would address the problem.

While a parallel was often drawn with alcohol, there was a valid argument that regulation was not working when there were high rates of teenage binge drinking.

“There’s a pretty high threshold that they’re going to have to get over to convince not just the government, but the community that this would be a positive step,” she said.

Greens senator Richard Di Natale said the party backs decriminalisation for personal use, but doesn’t want to go down the same road as alcohol.

“We took a product that was illegal and we put it in the hands of big corporations,” he told reporters in Melbourne.

“We promoted it, we marketed it, now we have an enormous problem with alcohol dependence in this country.”

Former West Australian premier Geoff Gallop said the current law-and-order system of dealing with drugs in Australia was not working, particularly from the perspective of drug users.

More emphasis should be placed on the needs and interests of individual people and to design a system that could help them “rather than make their life a lot harder for them, as we do when we criminalise this issue”, he said.

Mr Johnson told reporters on Tuesday that when Mr Gallop was premier, he presided over a surge in drug use after his government decriminalised the smoking of small amounts of marijuana.

“We became known as the cannabis capital of Australia and we saw cannabis use grow extensively,” Mr Johnson said.

“Drugs are not good for anybody, and if you start decriminalising it, what you see is an increase in use, you see people going from cannabis to harder drugs. You get people with psychotic problems.”

Former NSW director of public prosecutions Nicholas Cowdery said he was strongly in favour of legalising, regulating, controlling and taxing all drugs.

“A first step toward such a regime could be decriminalisation, similar to the approach adopted 10 years ago in Portugal,” he said at the report’s launch in Canberra.

Victoria Police deputy commissioner for crime Graham Ashton said calls for decriminalisation did not take into account the criminal flow-on effects of drug use, such as family violence, road fatalities and assaults.

“Decriminalisation is a simplistic response. It doesn’t take into account the community harm that drugs do,” he told journalists in Melbourne.

Earlier, Victorian Premier Ted Baillieu said he had no plans to decriminalise drug use.

Mr Baillieu said he was always interested in anything that would reduce drug use.

“Certainly, as far as we’re concerned, we have no intention of decriminalising the use of drugs,” he told reporters in Melbourne. – AAP

What do you think? Should drugs be decriminalised in Australia? Tell us below: