Former Labor prime minister Paul Keating thinks he would be a better leader now than he was 16 years ago. 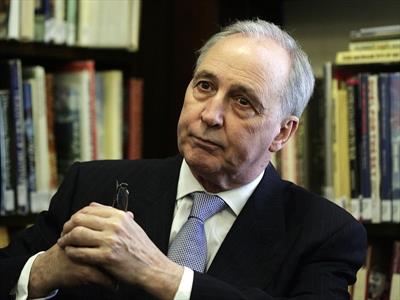 FORMER Labor prime minister Paul Keating thinks he would be a better leader now than he was 16 years ago.

In an interview with the national German daily Frankfurter Allgemeine Zeitung (FAZ), the party icon ruminates about the issue following the elevation of his NSW Labor colleague Bob Carr, 64, to the Senate.

“I can do the job more easily now than I did at that time,” he says, according to a translation and other quotes provided by the author.

“Because as you get older you do get smarter.

“You get more efficient about the way you devote your time and energies.

“And therefore I would be much more effective at doing this.”

In the feature story, Mr Keating, who is contemplating his 68th year, acknowledges the “very big” commitment required to be prime minister of Australia.

He also appears to rule out any chance of returning to the political fray, as former NSW premier Mr Carr will do next week.

Mr Keating was photographed having lunch with Mr Carr in Sydney’s Potts Point last Saturday, a day after Mr Carr, who was enjoying retirement, was offered the senate vacancy and the foreign ministry by Prime Minister Julia Gillard.

It also compares him to reformist German politician Helmut Schmidt, a Social Democrat who was Chancellor of West Germany from 1974 to 1982.

Mr Keating was prime minister from December 1991 to March 1996, when he lost the election to the Liberal MP John Howard. – AAP

What do you reckon? Would PK make a better PM than Julia today? Comment below: