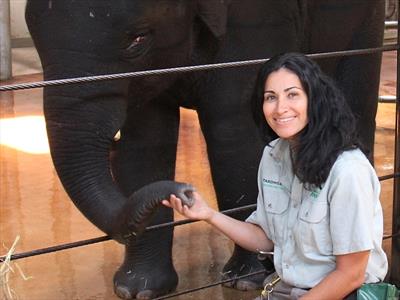 A YOUNG elephant at Taronga Zoo may have been stirred up by a rush of hormones and female elephants nearby when he challenged keeper Lucy Melo in an almost fatal attack.

Ms Melo went back to work at Taronga on Tuesday, three months after she was crushed against a bollard by two-year-old Pathi Harn, the elephant formerly known as Mr Shuffles.

Her return came as the zoo reported Pathi Harn had experienced a spike in testosterone on October 19 that may have affected his behaviour towards his trainer.

“When we examined Pathi Harn’s testosterone, he went through a spike that was higher than any of our resident males,” said Dr Rebecca Spindler, Taronga Zoo’s acting general manager of research and conservation.

“It’s entirely possible that this spike contributed to some of the sudden change in behaviour we saw in Pathi Harn.”

The zoo’s behavioural assessments also noted the presence of two female elephants who were on heat at the time of the incident.

“We don’t know for sure whether this had any impact on Pathi Harn’s behaviour, but it is a coincidence and it does seem to make some sort of sense,” Dr Spindler told reporters.

“We know that testosterone does have some sort of behavioural impact on elephants.”

The review said keepers had observed boisterous behaviour from the two-year-old in the days leading up to the accident.

“Worldwide, he is the fastest developing elephant that we know of.”

The zoo says it is unclear whether the calf’s rapid development was linked to his “miracle birth”.

Pathi Harn – which means “miracle” in Thai – was born two days after he was pronounced dead in the womb.

He was nicknamed Mr Shuffles for the way he walked – characteristics that reduced him to the bottom of the zoo elephant herd hierarchy.

Ms Melo’s heart stopped for five minutes after the attack, but she was revived and spent 12 days in a Sydney hospital in October.

She returned to full-time work at the zoo on Tuesday, much to the joy of the elephant herd, which welcomed her with a low rumble.

Ms Melo and the zoo’s other keepers will continue to work with Pathi Harn on an accelerated training program.

“I just wanted to personally thank everyone for their ongoing messages of support,” said the trainer in a video message.

“It has meant to much to me and it has truly helped me in my recovery.”

The zoo will carry out additional safety measures to allow for Pathi Harn’s hyperactivity.

As planned earlier, Pathi Harn will be transferred to the Taronga Western Plains Zoo at Dubbo when he is older. – AAP