Gillard disappointed for Labor in Queensland

Prime Minister Julia Gillard says she is deeply disappointed by Labor's election loss in Queensland and the party needs to respect the message sent by the state's voters. 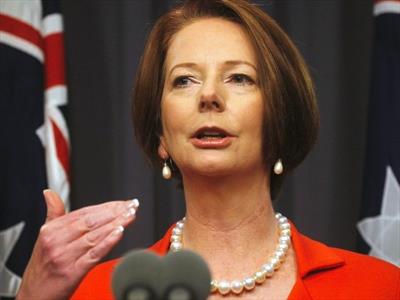 PRIME MINISTER Julia Gillard says she is deeply disappointed by Labor’s election loss in Queensland and the party needs to respect the message sent by the state’s voters.

Ms Gillard, who is in Seoul for nuclear disarmament talks, said she had telephoned incoming Liberal National Party premier Campbell Newman to congratulate him.

She also had spoken with outgoing Labor premier Anna Bligh, who she described as a “woman of great capacity with a great heart”.

“I’m a Labor person so obviously to see an election loss like that for Labor is a deep, deep disappointment to me,” Ms Gillard said.

“We have had Queensland Labor govern Queensland for 20 of the last 22 years.

“Queensland Labor has got many achievements to be proud of across those two decades.

“But the people of Queensland have not only spoken a message to Queensland Labor, indeed they have shouted it and that message needs to be respected.”

Ms Gillard said there would be discussions about the implications of the loss for federal Labor.

Since becoming prime minister, Ms Gillard said she had “never underestimated the degree of challenge” faced by Labor.

“We’ve got a lot of hard work to do, for the people of Queensland,” she told reporters in Seoul.

“Ultimately, the 2013 election will be decided on its own issues.”

Ms Gillard said she’ll continue to “knuckle down” and get on with the job of governing.

“What I believe Australians want to see from their government, and what I seek to provide as prime minister, is the leadership necessary to manage the economy in their interests today.”

Asked if voters could trust her government, given her broken promise on the carbon tax, Ms Gillard said: “I have acted in the national interest.”

“I’m happy now and in the 2013 election to say `who do you trust to manage the economy in the interests of working people?’

“Who do you trust to understand the needs of the future and the building of that future economy?

“Who do you trust to spread the benefits of the mining boom to make sure that they are shared by all Australians?

“Who do you trust to improve your local schools and local hospitals?”

Ms Gillard said Opposition Leader Tony Abbott had been conducting himself as if he had the next federal election in the bag.

“He’s already announcing to the world he’s going to be the next elected prime minister,” she said.

“His attitude is he’s got it in the bag.

“His attitude is he doesn’t have to say anything except `no’ to everything to get there.”

Ms Gillard said her government was managing the economy to benefit working people, not just a privileged few.

“That’s a struggle every day in the parliament because of the advocacy by Tony Abbott and his friends of the interests of a privileged few.”

Ms Gillard said there was clearly a major “it’s time factor” for Labor in Queensland where it had been in power for so long, and the expectation was that the state government would be defeated – “and soundly”.

But the size of the defeat, leaving the state party with just six or seven seats, did surprise her.

“The dimensions of this defeat took me by a bit of surprise on Saturday night,” Ms Gillard said.

“Labor in Queensland, state Labor, has got a lot of rebuilding to do, we have got a lot of hard work to do and I’ll get on and do it.”

The federal party continues to lag in the opinion polls, which are pointing to a coalition election win.

Asked if she and Ms Bligh were being punished for breaking election promises, Ms Gillard said that at the time of the 2010 federal poll she meant what she said.

Later, she needed to make a choice about Australia’s “clean energy future” when she formed a minority government with the support of the Greens.

“And there is no place in the country that stands to better prosper from a clean energy future than Queensland because of its natural assets and natural advantages,” she said.

“I have acted in the national interest to get a benefit for the nation through a clean energy future, and also to deliver practical benefits for families today, in the form of tax cuts and family payment increases, and increases in the pension.” – AAP