Four Dutchmen avoid croc attack but have an itch

Savaged by sandflies and mosquitoes, four Dutchmen were winched to safety after spending a night up a tree to evade crocodiles in Darwin Harbour. 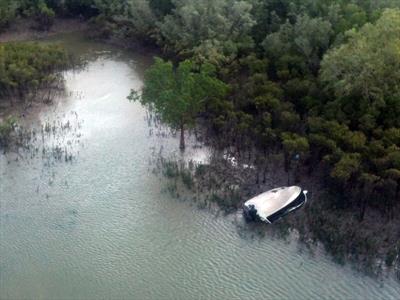 FOUR Dutchmen had a harrowing night after scrambling up a tree to avoid a crocodile when their boat capsized in rough seas in Darwin.

The four men aged in their 30s were stuck for more than 20 hours in mangroves after their boat capsized while they were trying to catch mud crabs in Darwin Harbour about 11am (CST) on Sunday.

“There was one croc, but the sandflies, they really get you,” one of the men later said.

Director of CareFlight, Ian Badham, said apart from being covered in insect bites, the men were in good health despite their ordeal.

“After their boat capsized they got themselves into the mangroves and spent the night in the tallest mangrove tree they could find,” Mr Badham said.

“They were bitten savagely by sandflies and mosquitoes and were very worried about being eaten by larger things.

“They did see crocodiles, but they (the men) stayed out of the water,” he said.

Despite 432 Indigenous deaths in custody since 1991, no one has ever been convicted. Racist silence and complicity are to blame

How a tightening of wallets pushed Australia into recession

It was only on Monday just after 8am (CST) when the tide went out that the men were able to get back to their small craft and activate the emergency beacon, Mr Badham said.

The beacon alerted the Australian Maritime Safety Authority, which alerted the Northern Territory Police, CareFlight and a commercial helicopter.

The commercial helicopter spotted the men and CareFlight then winched them up to safety and across to a sandbar to be checked out.

On Sunday night Darwin was buffeted by gusty winds up to 50km/h and up to 25mm of rain fell.

Larry Tessman from Jayrow Helicopters, the first to spot the men, said they were relieved to see his chopper.

“They were in the mangroves and mud, and one bloke came out and waved to us,” he said.

“They did say there was a croc watching them,” he added.

Mr Badham said the men were okay but feeling embarrassed.

“They kept a level head overnight, were sensible and because of that they are alive,” he said.

Do you know about David Dungay Jr

A go-slow on spending sent the economy backwards

Poor March quarter figures and expected larger contraction in June pushes the economy into recession for first time in nearly...

Police officer under internal investigation for his actions during protests in the US. In London, an Aussie TV journo is...