The Australian government have confirmed a Chinese warship will visit Australia in October to participate in an international fleet review marking the 100th anniversary of the Royal Australian Navy. Prime Minister Julia Gillard is to embark on a five-day trip to China later this month, where she is expected to raise the issue of North Korea with Chinese leaders. 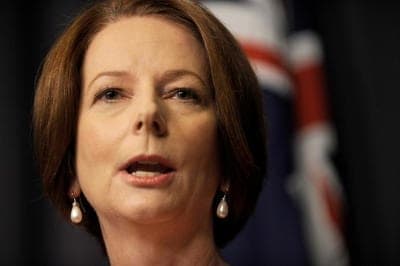 THE AUSTRALIAN government has taken further steps to enhance its military relationship with China this week with confirmation that a Chinese warship will visit Australia in October to participate in an international fleet review marking the 100th anniversary of the Royal Australian Navy.

The announcement comes in advance of Prime Minister Julia Gillard’s five-day trip to China later this month, in which she will attempt to solidify the long-standing regional partnership between the two countries. It is expected that the Chinese warship involved in October’s fleet review will participate in military exercises with the Royal Australian Navy while visiting Sydney.

Military cooperation between China and Australia has increased significantly in recent years, with the HMAS Ballarat docking in Shanghai last May. Defence ministers from both countries met in China shortly after. The defence partnership has included Australian officers teaching the Chinese about military law, maritime security and emergency management while the Chinese government have provided Australian troops with advanced language training.

The thriving military partnership between Australia and China comes at a time when the nuclear threats of China’s traditional ally North Korea have caused tension in the Asia-Pacific region to reach an all-time high. In a press conference held yesterday Chinese officials expressed regret that North Korea intended to reopen all of its nuclear facilities amidst growing concerns that North Korean leader Kim Jong-Un would use nuclear weapons in an attack on South Korea.

Kim declared an end to the truce that had maintained the status quo on the Korean Peninsula for six decades on Saturday, after the North Korean leader claimed that the United States of America had provoked a return to warfare by flying nuclear-capable aircraft along the Korean border. He directed the North Korean military to prepare itself to launch an attack on South Korean or American military bases in the region immediately.

Chinese Foreign Ministry spokesman Hong Lei has called for an “easing of tensions” on the Korean Peninsula, while Australian Foreign Minister Bob Carr called on China to enforce United Nations-imposed sanctions more strictly on ships and planes entering the country through Chinese territory.

Carr said: “That’s something we’ll be talking about when we’re in China. We’re going to emphasise the importance of taking action on North Korea but we appreciate you have to approach that in a manner that recognises their relationship – rather than just bursting in and telling them our view of the world.”

North Korea had more sanctions imposed on it by the United Nations in February after it conducted a nuclear test. These sanctions included tougher financial restrictions and a ban on luxury items such as yachts, jewellery and perfume. Despite these sanctions coming in effect two months ago, reports suggest that the trade in these products continues across North Korea’s border with China.

Carr will join Gillard on her five-day mission to China, in which they will meet the new Chinese President, Xi Jinping. Xi served as Vice President of the People’s Republic of China for five years, assuming additional responsibilities as head of the country’s military late last year. He assumed the position of Chinese President two weeks ago.