Racing enthusiast Camilla, the Duchess of Cornwall will present the Melbourne Cup to the winner of the race that stops a nation, the palace has revealed. 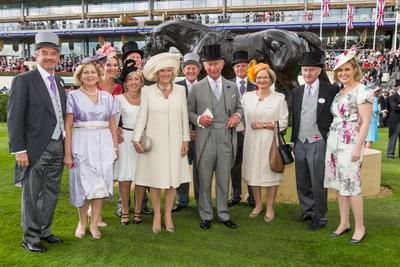 Racing enthusiast Camilla, the Duchess of Cornwall will present the Melbourne Cup to the winner of the race that stops a nation, the palace has revealed.

Accompanying her husband Prince Charles on an official six-day visit to Australia in November, the royal couple have willingly accepted an invitation from race organisers to play an important part in the 2012 Flemington program.

And while his wife takes the top prize, the heir to the British throne will present a trophy to the winner of the next race, the Diamond Jubilee Plate.

“We were asked if they would like to do it, and of course they are both great racing fans … and very touched that they’ve asked the Duchess to present the Melbourne Cup,” private secretary to Charles and Camilla, Clive Alderton, said.

It is a starring role for Camilla, 65, who will overcome a dislike of air travel to make the long trek south to tour Papua New Guinea, Australia and New Zealand over two weeks, as she and Charles represent the Queen in her Diamond Jubilee year.

“Their Royal Highnesses are going to set a pretty taxing pace in their Australian visit,” Mr Alderton told media during a briefing in London.

“Somehow we’re going to fit in five states and one territory in only six days, which given the size of the country is going to be no mean feat.

“The theme of the Jubilee … is service to others and the Royal Highnesses are determined to meet as many people as possible in the time available, which is why we’re trying to get around as many states and territories as we possibly can.”

Charles and Camilla’s first Australian touchdown will be at Longreach on 5 November, followed by Melbourne, Adelaide, Hobart, Sydney and Canberra from where they leave for NZ.

The same day, the couple is scheduled to meet privately with family members of Australian soldiers recently killed in action.

While Charles – who celebrates his 64th birthday while travelling – has visited all three nations before, it will be the first time Camilla has been to PNG, Australia or NZ.

She will carry out both solo and joint engagements during the tour, which promotes public participation while focusing on themes including economics, business, sport, culture, youth, the environment, agriculture and education. – AAP