A bushfire suspected of being deliberately lit has brought an end to an Australian environmental activist’s record breaking sit-in at the top of a tree in Tasmania’s Styx Valley to protest logging practices in native forests. 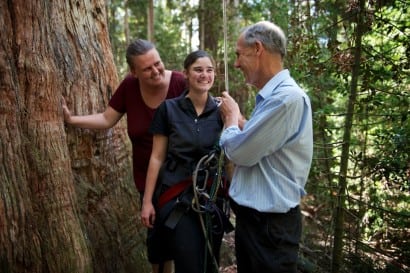 OCCUPATION tree top has ended after 457 days. Miranda Gibson, 31, who first climbed up a 400 year old tree in Tasmania’s Tyenna Valley on 14 December 2011, has had to evacuate from her platform, as the threat of a nearby bushfire increased.

Former Greens Leader Bob Brown was first to greet Gibson once she had reached the ground.

“What a brilliant Australian she is and what a terrific statement she’s made for the planet,” he said.

Gibson, a representative of conservation group Still Wild Still Threatened, took this lengthy and extreme measure as a reaction to learning ancient trees in the valley were due to be felled by logging companies.

“Miranda’s tree, when she got up there, was going to be a pile of wood-chip. Now it’s going to be World Heritage,” Brown said.

For almost 15 months Gibson has attracted significant attention for her tree protest and raised the public profile of Tasmania’s forests. Within moments of returning to earth she was still fighting for the cause.

“Areas nominated for World Heritage continue to be logged, areas like Butlers Gorge and the Styx Valley,” she told the gathered media.

“With my feet on the ground now, I’m absolutely committed to continue this fight until we see an end to the logging of Tasmania’s ancient forests,” Ms Gibson said.

Australian Greens leader Christine Milne, who visited the tree-sit earlier this year, praised Ms Gibson for the contributions she had made.

“I know this is a difficult decision for Miranda to leave the Observer Tree after 451 days, but I know that her campaign to protect our native forests will continue now she is on the ground,” she said.

“Miranda’s global outreach has been a constant reminder that Tasmania’s global reputation as an area of great beauty and wilderness is at risk if logging continues.”

Tasmania’s Premier Lara Giddings did not share Milne’s sentiment, saying “I don’t think she should have ever gone up in the first place.”

Authorities have said that the fire which was burning two kilometres from Gibson’s tree platform may have been deliberately lit. Bob Brown has raised speculation as to whether there were more sinister motives behind the lighting of the fire.

“Why a fire was lit 1km from here is beyond me and there was no lightning,” he said.

“If it’s been lit, it’s one of the lowest (acts) that somebody supporting the logging industry could do.”

Gibson’s 457 day tree sit broke the Australian record, topping the 208 days Manfred Stephens spent up a tree near Cairns in 1995.

The world’s longest record was set in the US between 1997 and 1999 when Julia Butterfly Hill sat in a 180ft-tall California Redwood tree for 738 days to prevent loggers cutting it down. Her protest was successful.