Thousands of mourners turned out across London today to pay their respects to Baroness Margaret Thatcher, while others took the chance for one final protest. 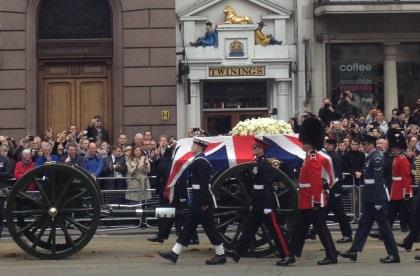 THOUSANDS of mourners turned out in London today to pay their respects to Baroness Margaret Thatcher, who passed away last week aged 87.

Whilst 2,300 of the former British leader’s friends, colleagues, foreign dignitaries and celebrities gathered in St Paul’s, London locals, tourists and protesters lined the streets of the processional route to await the passing of her coffin.

Outside the RAF church St Clement Danes in the Strand, where the coffin was due to be transferred from a hearse to a gun carriage of the King’s Troop Royal Horse Artillery before making its way towards St Paul’s, the mood was sombre and subdued.

People milled quietly as police performed last minute checks of the nearby statues and posts. The only sign of protest was a lone placard weaving its way behind the crowds opposite as its bearer made their way towards the Royal Courts of Justice.

A helicopter flew overhead as a marching band heralded the commencement of the proceedings. Then another marching band, and another. When the Baroness arrived in a hearse, draped in a Union Jack flag, she was met with the flashing of cameras and the tolling of bells.

The coffin was then transferred to a gun carriage, to be led by a band of the Royal Marines down Fleet Street.  Besides the cameras, there was only the faint sound of hymns from inside the Church and polite clapping as the body was led off.

The mood throughout remained respectful and quiet, and most seemed to be there to honour the passing of a British statesman.

“It was lovely and respectful,” said a spectator behind me.

Down further on Fleet Street the reaction of the crowds was slightly different. Booing was heard and heated exchanges broke out between demonstrators and Thatcher supporters.

Right to the end Lady Thatcher proved to be a magnet for division. Outside the Royal Courts of Justice tempers boiled over when the gun carriage procession passed.

Admirers attempted to drown out the boos with clapping. While some loudly expressed anger at the former PM’s policies, others erupted in fury at those doing so. One woman, perhaps in her late 50â€²s and who claimed to be a veteran of many anti-Thatcher campaigns, turned her back to the procession.

The sign she held was quickly ripped from her grasp by one onlooker while another exploded with insults of ‘you’re scum’ and ‘you are insignificant’ and threatening her with ‘a bottling’. 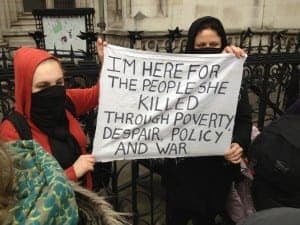 The eight pall-bearers who carried the casket into the cathedral were drawn from army units, Royal Navy ships and RAF stations with links to the Falklands war, commanded by Major Nick Mott of the Welsh Guards who served in the 1982 conflict.

The coffin was escorted into the cathedral by Baroness Thatcher’s grandchildren, Michael and Amanda, who walked ahead bearing cushions with the insignia of the Order of the Garter and Order of Merit. These were laid on the alter.

“There is an important place for debating policies and legacy; for assessing the impact of political decisions on the everyday lives of individuals and communities,” he told the congregation.

“Parliament held a frank debate last week — but here and today is neither the time nor the place.”

The service was traditional and simple, and had been planned years ago with Baroness’s consultation.

In addition to readings by Amanda Thatcher from the King James Bible, Ephesians 6, 10-18 and David Cameron from John 14, 1-6, there were a number of hymns. Baroness Thatcher had chosen the hymns He Who Would Valiant Be, the Charles Wesley hymn Love Divine, All Loves Excelling, reflecting the influence of her Methodist upbringing, and the patriotic verse I Vow to Thee My Country.

At the conclusion of the service the coffin was taken to the Royal Hospital Chelsea before a private cremation at Mortlake Crematorium in south-west London.