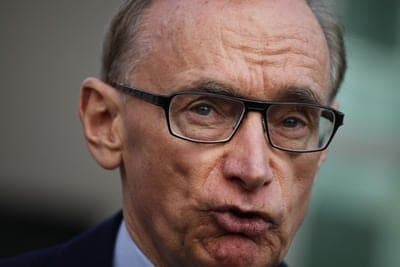 Australia’s ambassador to Libya, David Ritchie, is on his way to meet with Ms Taylor in Zintan in the country’s north west.

She and three other International Criminal Court (ICC) envoys have been placed in “preventive detention” in prison for 45 days as Libya investigates alleged threats to its national security.

The four-member legal team for Muammar Gaddafi’s son, Seif al-Islam, has been held since Thursday in the western town after Ms Taylor was found carrying documents for Seif that were considered a “threat to national security”.

Senator Carr on Tuesday night said Mr Ritchie had arrived from Rome and would travel the 160km from Tripoli to Zintan along with ICC representatives and ambassadors from the countries of the other detainees.

“He’s going to Zintan … (we are) reasonably hopeful that he will get consular access and that some negotiations can get underway (for Ms Taylor’s release),” Senator Carr told ABC TV from Saudi Arabia.

“We are doing everything we can in circumstances where Libya has a great deal of fragility and complexity but we are quietly confident, especially with the arrival of our ambassador from Rome, that we can make progress.”

He said the ICC group and the other ambassadors expected they would be able to see their people.

If consular access was granted, Ms Taylor should be able to speak with her husband in The Hague and parents in Brisbane.

Senator Carr has been in contact with the family and they have received several briefings from his department.

“At this time all our thoughts are with them,” he said.

“I can only imagine the anxiety they feel, especially with the latest news.”

Senator Carr said Mr Ritchie had given him more confidence that the authority of the central government, operating from Tripoli and Benghazi, would be respected by officials and militia in Zintan.

Previously he had feared authorities in Tripoli had “limited authority in Zintan”.

Ms Taylor is part of an ICC team in Libya to help Seif choose a defence lawyer.

Ahmed Jehani, Libya’s envoy to the ICC, has said she was caught “exchanging papers with the accused Seif al-Islam”.

Mr Jehani alleged she was carrying a pen camera and a letter from Mohammed Ismail, Seif’s former right-hand man, who is now on the run.

He said the letter contained drawings and symbols, a “code” that would be understood only by the sender and the intended recipient, Seif.