Australia's Department of Veterans Affairs has responded to calls by the Victoria Cross Trust in the UK for funds to restore the neglected grave of Gallipoli leader General William Birdwood in Twickenham Cemetery to honour the man who gave ANZAC Cove its name.

by Simon Kleinig
in News 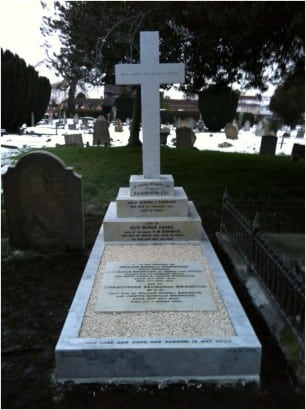 ALL Australians know the story of Gallipoli, where the ANZACs landed on 25 April 1915 to place Australia on the world stage for the first time. Fewer Australians know of William Birdwood, the English general who gave them their name – ANZACs. The popular term ‘Digger’ also originates from Birdwood’s instruction to “dig, dig, dig, until you are safe”, directed to the embattled ANZACs clinging tenaciously to the rugged slopes above ANZAC Cove.

Birdwood was brave and led by example, and quickly earned the respect of the Australians, who referred to him affectionately as ‘Birdie’. He was frequently seen in the front trenches at Gallipoli, chatting with the diggers and sharing their risks. On one occasion Birdwood attracted enemy fire, but a nearby digger shouted: “Duck, Birdie”, and probably saved the General’s life. An officer standing close by promised to charge the solider with insubordination, but Birdwood, impressed by the soldier’s quick thinking, simply replied “No, give him a bloody medal”.

Birdwood’s hard-won respect by the ANZACS was enjoyed by few other British Generals. After World War One, Birdwood nearly became Governor-General of Australia, but missed out to Sir Isaac Isaacs, much to the disappointment of King George V and many Australians. Birdwood died in England in 1951 and was buried with full military honours. The town of Birdwood in the Adelaide Hills is named after him.

Unlike those soldiers whose graves are maintained by the Commonwealth War Graves Commission, General Birdwood was buried in a private grave at Twickenham Cemetery, the responsibility of his family. In recent times the grave had fallen into disrepair and moves were afoot to repair the grave. But the Australian Department of Veterans Affairs was quicker off the mark. Permission was gained from General Birdwood’s grandson to repair the grave, and the work was completed in January 2013. The grave has now been restored to its former gleaming, pristine glory.

London Legacy is hosting its annual ANZAC Ball at Australia House on 19 April 2013. Randolph Churchill, the great-grandson of Sir Winston Churchill, will be guest of honour. General Birdwood will also be remembered, as his close connection with the ANZACs helps to complete the circle begun when the young Winston Churchill, as First Lord of the Admirality, committed Allied troops to Gallipoli. The campaign that followed was a disaster – through no fault of the ANZACs – but that’s another story.