It seems we earn more, pray less and love everyone, as jobs head west and cities expand with new waves of migration, the latest census reveals. 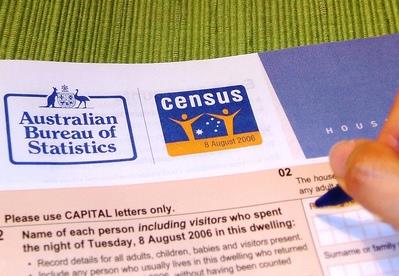 IT seems we earn more, pray less and love everyone, as jobs head west and cities expand with new waves of migration, the latest census reveals.

A quarter of Australians are now born overseas, many arriving fromIndiaandChina, making Mandarin the second-most common language spoken in our homes, now ahead of Italian.

“One thing is clear: we are substantially, significantly different from what we were five years ago,” said Andrew Henderson, executive director of the 2011 census.

The Australian Bureau of Statistics (ABS) released key results from the 2011 census on Thursday, revealing the extraordinary population growth acrossQueenslandandWestern Australiaand the changing face being reflected in the national mirror.

While the majority of migration is still coming fromEurope, there are far more residents coming from Asian countries.

Indiahas even doubled as a source of migration since 2006 while Chinese-born migrants rose 54 per cent.

Vasan Srinivasan, president of the Federation of Indian Associations of Victoria, attributes the big increase to the 2006 Commonwealth Games inMelbourne.

There were more than 21.5 million Australians counted on census night last August — an 8.3 per cent increase from five years ago.

But most of that growth has been withinAustralia’s mining states: WA’s population climbed 14.3 per cent whileQueenslandwas close behind at 11 per cent.

Many are moving from urban to remote areas for these jobs, with nine out of 10 of the biggest growth areas in rural WA, includingEast Pilbara, which has a population boom of 82.6 per cent.

The number of Aboriginal or Torres Strait Islanders has also increased by 20.5 per cent, but officials are linking this trend to an increased level of confidence in census reporting.

“The census highlights these changes that are underway and I think what it says is that if we are a confident and ambitious country we have to deal with change,” Treasurer Wayne Swan told parliament.

“And when we’ve dealt with change successfully we’ve become a stronger country.”

More Australians no longer have a religious affiliation — up significantly to 22.3 per cent from 18.7 per cent.

Shifts in migration, however, have brought increases in other religious faiths, especially among Muslims and Hindus.

“We are not a Christian nation at all,” the Atheist Foundation of Australia said in a statement.

But Christianity still remains the most commonly reported religion in the census, at 61.1 per cent of the population, despite a nearly three per cent drop in five years.

For the first time, the 2011 census also counted 1338 same-sex married couples. Previously, they were lumped together with the 32,377 same-sex de facto relationships.

The national census, now in its 100th year, is often used by governments and municipalities to assist in planning and funding, but it has also developed into an important tool for charities, academics and even businesses.

Dr Martin Parkinson, secretary to the Treasury, said the census shows where we live, work, and can help in planning health, education and future retirement ages.

“It helps inform our view of the complex nation that we are,” he said. — AAP