It may be the ultimate indiscreet lunch. WikiLeaks is offering eight people the chance to dine with founder Julian Assange as a fundraiser for its secret-spilling work. 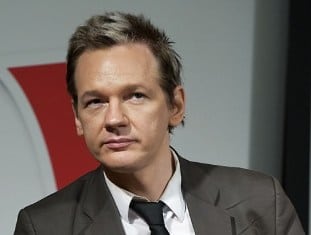 The site says guests will dine July 2 at “one of London’s finest restaurants” with Julian Assange and Slovenian Marxist philosopher Slavoj Zizek.

Later that day the pair are due to give a talk about WikiLeaks’ impact.

Assange is on bail in Britain as he fights extradition to Sweden on allegations of sexual misconduct against two women, which he denies.

WikiLeaks spokesman Kristinn Hrafnsson said Assange, who is living under a strict curfew in Britain after being arrested at Sweden’s request in December, is holding up very well.

Assange is holed up on a friend’s country estate in eastern England as he fights a British judge’s decision to extradite him to Sweden over allegations of sexual assault.

“He has a strong personality and a strong conviction – he has belief in what he is doing,” Mr Hrafnsson said.

The Icelandic journalist also repeated Assange’s claim that he does not know US soldier , the alleged whistleblower who delivered to WikiLeaks hundreds of thousands of secret US cables that have since been published in media outlets around the world.

Private Manning has been held in solitary confinement in the US for the past year.

A US federal grand jury is trying to establish a direct link between Manning, Assange and WikiLeaks.

“We have no idea whether he is the person who leaked the documents,” Mr Hrafnsson said.

“As Julian has said, he first heard the name Bradley Manning last spring when reports came out of his arrest – the same applies to me.

“If he is the source of this material, he is a hero in my mind.

“The treatment in the US of this young man is quite outrageous.

“In isolation, he has been stripped, sleep deprivation, a form of torture – it’s been outrageous the way he has been treated.”