All deals off without Gillard: Oakeshott

Federal Independent MPs are poised to pull the rug from under the Labor government if its leadership changes. 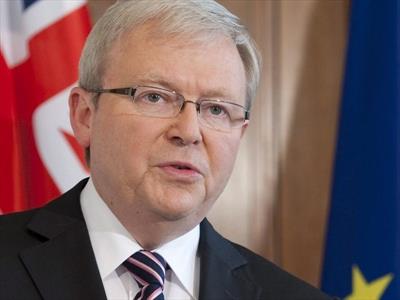 FEDERAL Independent MPs are poised to pull the rug from under the Labor government if its leadership changes.

Julia Gillard continued to dodge leadership speculation on Friday as she joked with the Prime Minister’s XI and Sri Lankan cricket sides and officials at the washed-out Manuka Oval in Canberra on Friday.

With opinion polls showing Labor lagging well behind the coalition, caucus members – who will meet in Canberra on Sunday for a pre-parliament strategy day – appeared divided into three camps: those in favour of Ms Gillard, those backing Foreign Minister Kevin Rudd, and a large rump in two minds about whether to stick with the prime minister or someone other than Mr Rudd.

But she received support from NSW independent Rob Oakeshott, who said AAP federal Labor had “rocks in its head” if the party thought it could change leaders without it affecting the parliament.

Mr Oakeshott is one of four cross-benchers who backed Ms Gillard into minority government after the 2010 election.

Part of the agreement is for the parliament to run its full term and for an election to be held in late 2013.

Mr Oakeshott said a leadership change could lead to the end of the Labor government.

“If the Labor Party thinks they can make an old-style change of leader without it affecting the make-up of the parliament they have rocks in their heads,” he told AAP on Friday.

“They need to be sensitive to the make-up of the parliament and there are supply and confidence agreements in place.”

Mr Oakeshott said any incoming Labor leader should not assume they could go to the governor-general and seek a snap election.

“We are obliged to sort it out as a group of parliamentarians,” he said.

Fellow independent Andrew Wilkie has already withdrawn his support because of the government’s scrapping of its promise to him on poker-machine reform.

NSW cross-bencher Tony Windsor said he would “take advice” if there was a change.

The Greens have previously flagged a similar position.

Ms Gillard used an interview with Canberra radio station 2CC to contrast her style of leadership with that of Mr Rudd – described by one Labor insider as having acted like the “president of Australia” – before he was ousted in June 2010.

“One of the things I’ve been very focused on as prime minister is to make sure that all our internal processes work well,” Ms Gillard said, adding Labor wanted to run a very competent, stable, methodical government.

“So it just makes sense to bring the team together at the start of the parliamentary year and talk about the year to come.”

Asked about reports of a Rudd revival within weeks, Ms Gillard said: “I don’t worry about chatter in the media, I get on with the job … I want the government to deliver results.”

Mr Rudd told reporters before leaving for Europe that he was “delighted to be the foreign minister”.

Employment Minister Bill Shorten, who was a key figure in Mr Rudd’s ousting as prime minister, was blunt in his assessment on Macquarie Radio.

“I believe so,” Mr Shorten said.

“Will the prime minister lead to the next election?”

Defence Minister Stephen Smith said he was a “strong supporter of the prime minister”.

“I’m confident the prime minister will lead us to the next election in the third or the fourth quarter of 2013 and I’m absolutely confident we will be very competitive in that respect,” he told Sky News. – AAP