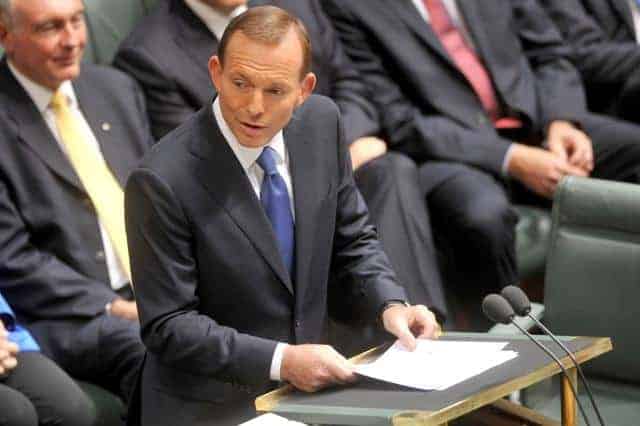 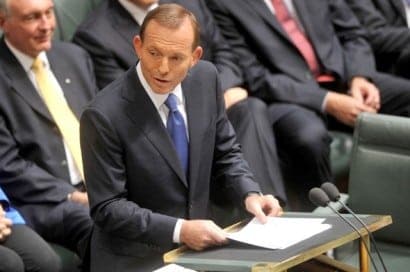 A FEDERAL coalition government will cut spending by $4 billion a year to fund the retention of tax cuts and pension and benefit increases linked to Labor’s carbon pricing regime.

Most of the savings will come from superannuation changes, which is likely to anger the federal government and unions.

But Tony Abbott says this is necessary because of the state of the budget and the economy.

“Thanks to Labor’s poor management over five years, there is now a budget emergency,” he said during his budget reply speech to parliament on Thursday night.

If the opposition wins government in September, it will discontinue the low income superannuation contribution that is part of Labor’s mining tax package, to save just under $1 billion.

It will delay by two years the phased increase in the superannuation guarantee charge from nine per cent to 12 per cent to 2021, to save $1.1 billion a year.

“This money comes largely from business – not from government – and our economy needs encouragement as mining investment starts to wane and new sources of growth are needed,” Mr Abbott said.

“These measures alone will produce nearly $5 billion a year in savings, which is more than enough for tax cuts without a carbon tax.”

The public service payroll will be cut by 12,000 over two years, saving $1.75 billion and the increase in Australia’s humanitarian intake by 6250 and the Clean Energy Finance Corporation will both go.

All the savings would go to retaining tax cuts and fortnightly pension and benefits increases tied up in the carbon tax compensation for households promised by the government.

“The carbon tax will go but no one’s personal tax will increase and no one’s fortnightly pension or benefit will reduce,” Mr Abbott said.

Treasurer Wayne Swan handed down the federal budget for 2013/14 on Tuesday and projected deficits for this financial year and the next two, before heading into the black from 2015/16.

He announced $43 billion of savings measures over the forward estimates, including the abolition of the $5000 baby bonus to parents, to help fully fund Labor’s disability care and schools funding programs and make up for a revenue slump driven by the high Australian dollar.

While the opposition planned to support the government’s savings measures, a coalition government would not “shirk the hard decisions” to get back to surplus, Mr Abbott said.

“At least for a first term, until we’re on an honest path not just to surplus but to repaying debt, an incoming coalition government will resist new spending commitments that aren’t fully funded, nearly always by offsetting expenditure reductions,” he said.

He said all of the opposition’s commitments were affordable and deliverable.

More funding details would be announced after the pre-election fiscal statement was released during the election campaign.

Minister for Employment and Workplace Relations Bill Shorten said Mr Abbott would cut the retirement savings of every Australian worker.

“A Liberal government won’t just delay the increase in compulsory superannuation contributions, they will scrap it completely,” he said in a statement.

He said superannuation contributed significantly to national savings, employment, financial stability and economic growth and took the pressure off the pension.

“Superannuation in Australia today is worth about $1.5 trillion and under Labor will be boosted by a further $500 billion by 2037,” he said. – AAP