Tim Freedman: Devil’s music in the House of the Lord 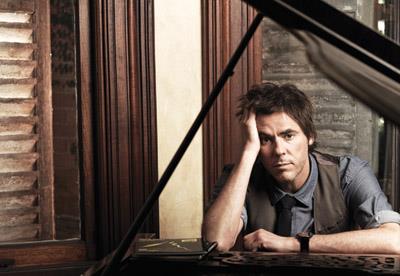 MY first foray into the world of live music as an impressionable teenager in Australia only carries fond memories. Great music, good people and the highlight — seeing Tim Freedman pour his bottle of red wine over the front row hecklers who were constantly berating him with South Park inspired calls of “TIMMY!”

Fast forward to today. I again have the chance to see Tim Freedman live — only this time without The Whitlams backing him, without a rambunctious university bar crowd to compete with, but charmingly still armed with that same bottle of red wine.

The gig took place at the Union Chapel; a functioning Church by day and a pumping gig venue by night. We’re seated in pews, under a very ornate ceiling surrounded by flickering candles, velvet curtains, Corinthian columns and religious sculptures. A gothic backdrop to the Devil’s music played in the House of the Lord … let us pray.

As the lights grew dim on a mixed crowd of Brits and expats, conversations were silenced as Tim Freedman confidently took to the stage and to the piano to sermonise us with the gospel according to Tim. Kicking off the journey with “Beauty in Me”, it was followed through story and commentary by “Charlie No.1” from Eternal Nightcap.

In this surreal environment, where one would think Rock-n-Roll would burst into flames as it crossed the threshold, we were treated to one of the most amazing and intimate performances I have ever seen. Funny and charismatic, Tim took each and every member of the crowd by hand and led us wherever he wanted us to go. And happily we went, without struggle or apprehension.

With an arsenal of great songs under your belt spanning a 20-year and seven-album career, you must ponder how best to present these to a willing and expectant crowd? Simple. Turn them into your life story. A guided tour of the last 20 years of Tim’s life.

“I wrote this song in my 20s” Tim tells us after he played the first of his Charlie Trilogy. “And as the night goes on I’ll play more songs from my 20s, then 30s and now 40s.”

From the “Charlie Trilogy” to “Blow up the pokies”, “No Aphrodisiac” to “Louis Burdett” and newer classics like “Keep the Light On”, each song was accompanied with a story about its subject, composition, and — more often than not — a humorous quip. Like accidentally crashing Gough and Margaret Whitlam’s 60th anniversary dinner, or spending $42.50 on TDK cassettes to market “No Aphrodisiac” to Triple J music programmers.

The journey was completed with soon-to-be hits off his new solo album Back When We Were Beautiful, but were not to be outdone by the final offering of a very Whitlam-a-fide Rolf Harris cover called “Two Little Boys”.

The audience were left feeling like they had just been through something special, a feeling experienced by Tim himself as he told me over a glass of wine at the bar post show.

“I didn’t know how’d it go tonight, I’m not used to this … but I went for it and somehow it worked.”

It certainly did. Thanks for a great show Tim and till next time — cheers.