Just a few hours south of the Icelandic capital Reykjavik, the Vestmannaeyjar islands sit atop one of the country's most geologically active faults. CAMERON BROCKMANN sets off on a ferry from the port of ÃžÃ³rlakshÃ¶fn to discover what life is like on these small pieces of rock.

by Australian Times
in Inspiration, Travel 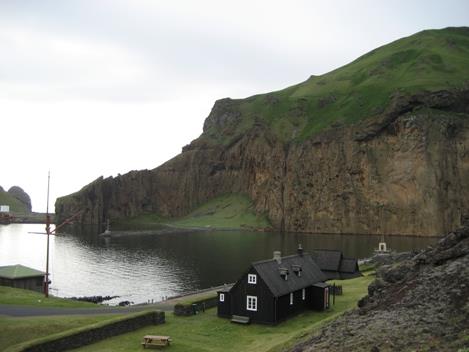 JUST a few hours south of the capital Reykjavik, the Vestmannaeyjar islands sit atop one of Iceland’s most geologically active faults. Cameron Brockmann sets off on a ferry from the port of ÃžÃ³rlakshÃ¶fn to discover what life is like on these small pieces of rock.

As the boat pulls away from the shore, the landscape is gradually bled of colour until all that remains is a spectrum of greys. Rolling over the waves, there is only the ocean and a sky stretched end to end with clouds collapsing into each other; and underneath everything, the warm throb of the ship’s engines. Then, after two hours small islands start to form almost imperceptibly, crystallizing on the horizon like thoughts; small black dots against a sheen of grey, as though called into existence by the ocean.

Five super luxurious hotels in Sydney to dream about

The ultimate survival guide for a business trip in New York

Passing through the harbour entrance on Heimaey, the only inhabited island, is like passing between the two extremes of the Icelandic landscape. On one side, the cliffs are so green and smooth they look like someone has poured a bucket of paint over them from a great height, a handful of microscopic sheep dotted absurdly on the almost vertical pastures. The other side of the harbour, is red and bare and raw; the result of an explosion so recent that Heimaey, the only inhabited island in the group still buzzes with its energy.

Life in Iceland is often dwarfed by nature, and there’s a constant awareness that your own life isn’t nearly as significant as a mountain. In the early morning of 23 January 1973, the volcano under the north coast of the island burst into life. A 3km long seam cleaved the island in two in a matter of hours. While Heimaey’s 5500 inhabitants were evacuated to the mainland to wait out the explosion, the earth poured forth so much of itself that when the eruption stopped five months later, the island had almost doubled in size, while the town had shrunk by half, its eastern part now encased in a 15m high mound of solid lava; the cooling, twisted rock formations already giving off a sense that they had always been there.

Heimaey town is a small collection of streets twisting their way eastwards from the harbour and stopping abruptly at a grass covered mound just a few minutes walk from the dock. As you walk up the narrow wooden staircase the wind quickly swallows every noise except its own. Eldfell has a peacefulness that belies the fact that the paths through the lava correspond to former streets: carved wooden signs with street names like UrÃ°arvegur and Heimatorg rest against the twisted pinnacles of rock.

Walking over lava fields is a singular experience. The ground feels not quite solid, not quite liquid, the hardened rock covered with a spongy layer of moss, one of the few plants that will grow in such windswept conditions. The actual volcano is underwater, so Eldfell is relatively safe, although the mosaic of red and black rocks that make up this new shore still pulse with energy — the entire island is now powered by the heat generated from the explosion site.

Volcanoes provide another valuable service: the only place to escape the wind in Iceland is inside the curved bowl of a crater. The steepness of the climb up the outside masks the true height of the crater, the peak looms periodically into view only as you crown the rises of the slope one by one. From the top, the crater sinks down to one side, the crater wall looking like a smooth curve although it’s composed of millions of tiny rocks.

Just enough feet have trodden the path to leave a slight groove through the avalanche of black stones indicating the path to the bottom, and, after a couple of minutes, there appears to be no way back when you look behind you. The rock walls filter out the gales, the gulls and the water; leaving only the warmth of the sun, an eerie quiet, and the calm of Orpheus descending. Sitting on the rock floor of the crater is one of the calmest of experiences, like looking up at the universe through the funnel of its creation. The rocks are still warm.

Time passes imperceptibly and I wonder what it must be like to have this constant reminder of the volatility of life just a few hundred metres away. Heimaey folds itself down from the foothills of its two volcanic mountains before falling back into the harbour, protected from the open ocean by only the narrowest of causeways. That life is possible here at all seems the most unlikely of propositions; yet islands like this one generally provide such inexhaustible fish stocks that their standard of living is one of the highest in the world. In fact, Heimaey has a reputation for being Iceland’s festival capital. Its national day celebration is one of the country’s largest, tripling the size of the town to over ten thousand people.

On an ordinary Tuesday in early summer however, these crowds are nowhere to be seen. Wandering through the narrow streets you glimpse the odd person out of the corner of your eye, but as you turn your head they disappear into the cracks of the town like mercury. At this time of year when the sun never drops beyond the horizon, the only reason to keep track of time is because the town’s cafe and supermarket, its petrol station with one bowser, and its volcano documentary cinema open for only a few hours in the afternoon.

There have been four explosions in the last century and no way of predicting when the next one might be. The looming explosion crater and twisting streets create the impression that you might never see the town like this again. The 1973 explosion must finally have tipped the balance for many of the townspeople; only 55% of the original population returned from the mainland.

With the town curled in on itself for the evening, it is up to the puffins to provide the only source of excitement in Vestmannaeyjar. Heimaey’s second major festival occurs on the long August nights each year when young puffins are ejected from the nest and are drawn more to the town lights than to the ocean. Children collect the young birds and keep them inside overnight before flinging them into the sea the next morning, and although the islands are home to over ten million puffins they can be almost as difficult to spot as the people. They fold themselves into the gaps in the vertiginous cliffs, emerging only to shoot into the ocean in a direct line from rock to water. As I dangle my feet over the edge of a cliff on one of these bright summer nights and watch the world fall away over the long curve of the earth, I think I understand where the locals might get some of their habits.

Daily connections to ReykjavÃ­k are available on Icelandair (from Heathrow) and Iceland Express (Gatwick/Stansted).

Both hotel and hostel accommodation is available in Heimaey.