Top scenic drives in the UK

Although it’s almost a cliché to venture to warmer climates like Mallorca or Corfu for the summer, seeing what Britain's own back yard has to offer is also just as fun.

by Shanaka
in Inspiration 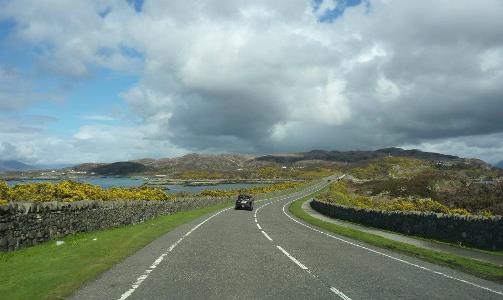 ALTHOUGH the UK attracts millions to major and well-known cities like London, Manchester or Edinburgh annually, the UK is also blessed with some stunning nature of its own with amazing driving routes to offer. Of course, for Australians, the UK doesn’t have the same coastal, forest or desert roads. Instead, they have a unique charm of their own.

The Northumberland Heritage Coast: The Heritage Coast stretches across 1,027 kilometres on the English coastside and 500 kilometres on the Welsh coastline. The coastal landscape and picturesque villages make this an unforgettable trip. And not only do you have the opportunity to drive past charming scenery but there is also the opportunity to drive through history with the route dotted with castles.

Bealach na BÃ : The third highest road in Scotland and located in the Applecross peninsula in the Scottish highlands, Bealach na BÃ  is a single-track road that curls through the mountains. Tight bends rise from sea level at Applecross to a total of 626 metres. Drivers have stunning views of the sea and uninhabited mountain regions which will make it hard to keep your eyes on the winding path. It is a great contrast to the vibrant city life in Edinburgh but has the same climate of four seasons in one day.

Humber Bridge, Kingston-upon Hull: The world’s fifth-largest single-span suspension bridge spans the Humber and thus connects North Lincolnshire and the East Riding of Yorkshire. Its total length is 2,220 metres and it was opened to traffic in 1981.

Scotland, A82 towards Glencoe:  Back to majestic Scotland. A reminder of the latest James Bond Skyfall movie with great shots of the rugged Scottish countryside, Glencoe is a small town in the Highlands in the West. Located in the dale Glen Coe and next to the mouth of the river Coe, Glencoe is part of Argyll County. Surrounded by mountains makes the area an amazing driving experience. Dramatic views are guaranteed, especially when the sun touches the peeks that are covered in snow and ice in winter.

Land’s End: The most westerly point of Britain attracts thousands of visitors each year. It is located on the Penwith peninsula and the term more often refers to its geographical situation than to the small settlement of the same name. Land’s End offers a great view on the Atlantic and rough sea cliffs.

The Lakes District: If you have been living in the UK for some time, you have probably come across people venturing to the Lakes District for a holiday. With the majority of it consisting of a National Park, going there is certainly not for a big city escape. Driving through some areas like Ulverston to Whitehaven for instance may seem like a rally drive with all the twists and turns and uneven road of the country. Careful not to get your confidence up too high though as sheep are frequently sitting on the roads at times.

These are just some of many beautiful scenic drives that can be made around the UK. If you’re from the city and wanting to venture on a road trip it is easy to collect a vehicle from major SIXT car hire points like Heathrow. So if you’re not looking for an expensive summer getaway, then try a long weekend road trip.