With a five day tour of the Scottish Highlands so full of highlights it couldn’t all be featured in one article, LEE CROSSLEY is back to present days 4-5 of his definitive run down of the amazing sights and sounds of Scotland. With Edinburgh only two hours from London by plane, what’s stopping you?

by Lee Crossley
in Inspiration 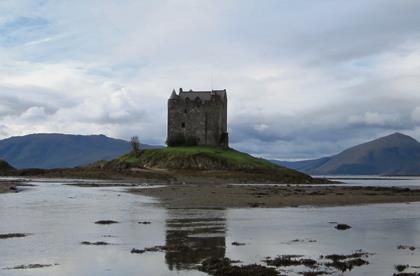 SCOTLAND was something of a mystery to me. I’d been to Edinburgh a couple of times but never ventured beyond the capital. This all changed when I embarked on a five-day Skye and Highlands Fling with Macbackpackers. In days 1-3 I was introduced to glorious glens and glistening lochs as we made our way through vast open spaces from Edinburgh to Inverness, and onwards to the Isle of Skye. With a 5 day tour packed so full of highlights I couldn’t feature it all in one go, days 4-5 again delivered amazing scenery, fascinating historical sights, as well as great food, and even better craic.

Day 4 — Kyleakin to Oban
You could hire a car and drive from Kyleakin to Oban in three hours, no worries. But you’d miss the good bits! That’s why you’d be mad not to do it with Macbackpackers, which take the best part of a day to show you the main sites in between.

Our first stop is Glenfinnan Monument, an 18m column that honours ‘Bonnie Prince Charlie’ and the 18th century Jacobite uprising. Atop the 59-foot tower, which you can climb for panoramic views of Loch Shiel, stands a statue of Charlie.

Interestingly, it was recently discovered that the monument is leaning to one side by about 27cm, sparking national media attention.
This got the Scots terribly excited, but the hype soon subsided with a National Trust spokesperson declaring: “They all love to hear the story of our leaning tower, although it’s not quite on par with Pisa.”

Across the road there’s a hill with walking tracks, where there are good views of the huge railway bridge featured in the Harry Potter films. Earlier in the day, we were fortunate enough to catch a glimpse of the steam train used in the films, which still runs.

Our lunch stop, Fort William, is the second-largest city in the Highlands and known as Britain’s Outdoor Capital. Its proximity to Ben Nevis, the UK’s tallest mountain, makes it a mecca for mountain climbers, mountain bikers and thrill seekers. For me, the drawcard of Fort William has to be the Hog Roast Company in the main mall. For £3 you get roast pork and apple sauce and crackling in a fresh roll. I’m still salivating.

Fort William also signifies the end point of the West Highland Way, a 96-mile track that stretches to outside Glasgow and attracts some 50,000 people annually. Each year there is a race with a simple objective: start at Milngavie Railway Station, 7miles north of Glasgow, at 1am on 23 June and run/jog/walk to Fort William Leisure Centre by noon the next day.
That’s 35 hours to cover 150km, including 4500m of ascent. The website’s conditions state that you must have two assistants within reach of a phone and a car to help find you if you’re lost in the dark. Not for the faint hearted!

Our next stop is Glencoe, site of the Glencoe Massacre of 1692 when more than 70 members of the MacDonald clan were murdered by the Argyll Regiment, made up largely by members of the Campbell clan.

Despite a long-running feud between the Campbells and the MacDonalds, the Campbells were billeted to stay with the MacDonalds in the hospitable tradition of the Highlands. Days later orders were given to turn on the MacDonalds and slaughter them all. The massacre stands as the worst example of treachery in Highlands history and played a part in the Jacobite uprising and re-ignited support for the exiled James VII.

Glencoe boasts some of the most vibrant greenery you’re likely to see in the Highlands. Walking through the Glen, there is an eerie feeling, knowing that in centuries gone by many MacDonalds took refuge in the hills, only to perish in the freezing conditions.

From Glencoe, we headed along the Argyll coast to Oban. Blasting from the speakers comes tunes from the Peat Bog Fairies, Red Hot Chilli Pipers and the Corries. Oban is the Seafood Capital of Scotland and boasts arguably the country’s finest seafood restaurant, Ee-usk, where a main will set you back about £20. I settled for Fish’n’Chips down on the main drag, which was more suited a backpacker’s budget. Marvellous!

Oh, and don’t forget to pay Oban Distillery a visit. The staff there are some of the most helpful you’re likely to meet in the Scotch Whisky community, members of whom can sometimes stare down their noses at the novice Scotch drinker. They have informative displays on different varieties and tasting notes on each.

Our night in Oban was spent tearing up the dancefloor at the Skippinish Ceilidh House, which puts on special Ceilidh nights. Ceilidh is a traditional Gaelic social gathering where Gaelic folk music is played. Venue owners Andrew Stevenson and Phil McPhail play the bulk of the music and are part of a well-known Scottish band Skippenish. A cracking night was had with the locals and tourists alike enjoying one of Scotland’s oldest traditions.

Day 5 — Oban to Edinburgh
Hungover and a tad sad and sorry for myself, I drag myself out of bed to the bus for an 8am departure from Oban.

Table chatter around the excellent breakfast at Oban Backpackers goes in one ear and out the other as my vice-like grip on a 2L bottle of Evian only tightens.

Our first stop is Kilmartin, one of Scotland’s richest prehistoric landscapes. Dotted throughout Kilmartin Glen lie ancient large standing stones which hold clues to life in the area as far back as the Bronze Age (3000BC). More than 350 ancient monuments lie within a 10km radius of Kilmartin Village. In the village itself, there is an impressive museum that explains each of the sites and their significance.

From here, we’re off to Dunadd Hill Fort. From ground level, it just looks like a small hill. But when you climb it and see the rock carvings that still exist from 500AD, you can see why it’s regarded as one of Scotland’s most important hill forts. From the top, you can easily see Jura in the distance, home to the famous Jura Whisky distillery and the isle where George Orwell wrote 1984.

On the way to Edinburgh we pass through Lochgilphead, a blink-and-you’d-miss-it town which wouldn’t get a mention except for one eight-year-old girl who make international headlines recently. Martha Payne, a student at the local primary school, started a blog about the poor standard of the school meals and it went viral. The attention generated by the blog led to Martha giving the proceeds from donations to improve the dinners to a global charity which provides food for starving people in third-world countries. She’s raised over £100,000 since the blog was launched in April this year.

Our last stop is the Wallace Monument at Stirling. The monument is one of Scotland’s most visited attractions, thanks largely to Mel Gibson. That’s right, Gibson’s Braveheart was a roaring success in 1995, increasing visitor numbers to the monument from 40,000 to 1 million in the next year alone.

The monument itself is well worth a look, a 67-metre sandstone tower from where panoramic views overlooking Stirling can be enjoyed. At the various levels are rooms with the Wallace story and other interesting Scottish History tidbits. Mention is made of the other Wallace monuments around the world, including one in Ballarat.

I quite liked the ‘Boasting Room’ which laid out all the things Scottish people have apparently given the world, including the decimal point, postcards, gas masks, insulin and the bowling green (among others). If you didn’t know it already, you leave here in no doubt the Scots are a clever lot whom have contributed much to our world. Some of the busts that line the walls in the monument include Sir Walter Scott, Robert Burns, Adam Smith, Robert the Bruce, amongst others. It’s basically a national tribute to Scotland.

One quotation that resonates is one from famous author Robert Louis Stevenson, who said: “The happiest lot in the world is to be born a Scotsman. You must pay for it in many ways … but somehow life is warmer and closer; the hearth burns more readily, the very names endeared in verse and music cling nearer around our hearts.”

And then it’s on to Edinburgh. As we pull into Castle Rock Hostel, we say our final goodbyes to Duncan and the group. The bus is unloaded and we all head in various directions. Five days of education, sightseeing, culture and experiences. I am exhausted yet exhilarated.

And to think I nearly didn’t come to Scotland at all. I could not speak highly enough of the Macbackpackers Highland Fling. You could hire a car and do it, but not nearly as well. Thanks to Duncan and the gang for making it one of my travel highlights of my two-year UK adventure.

One day when I am older I will return to Scotland. Visits to distilleries, golf and salmon fishing will no doubt feature. I would do it next week if I could but I’m back in Australia, 16,000 miles away. If you’re reading this in London right now, you’re less than two hours from Scotland by plane. You could be there next week. What’s stopping you?

Did you know?
Scotland is surrounded by more than 11,000 miles of coastline and has 900 islands near it, making it perfect for diving and seafood — if you can brave the icy waters.

Lee travelled with MacBackpackers on their 5 Day Skye and Highland Fling tour which runs all year round. For more information check them out at macbackpackers.com.