Another look at Amsterdam

Beyond the flashy lights of the red-light district, ALEX BRUCE-SMITH discovers there is a lot more to Amsterdam than booze and bongs.

by Alex Bruce-Smith
in Inspiration 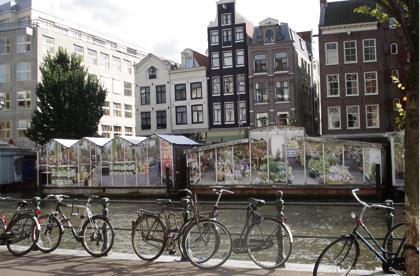 SAY Amsterdam to someone, and you’ll conjure up an image of many things: bongs, booze, and the infamous red-light district.

Amsterdam is synonymous with hedonism. The first time I went, I ticked all the boxes: staring contests with the ladies in the red-light district, blissful hours in the coffee shops, and dancing all night in the Liedersplein. I didn’t remember good chunks of my time there, and that’s exactly how I wanted it, thank you very much.

I’d been there, done that, gotten the T-Shirt.

A few months later, I received an email from my Dad — he had to go to Amsterdam on work, did I want to come visit? Hell yes I did! Oh, and my brother would be coming too. It was happy families all the way. Like taking my grandmother to Vegas.

So I had five days of being a proper tourist, one where I had to keep my blackouts to a minimum, and my clothes marijuana-scented free. I was going to rediscover the sights, as seen by the more sober tourist population.

The Amsterdam I discovered on this second trip had so much more to offer than the first. People were kind, thoughtful and creative — and not the Bob Marley wannabees I had imagined. The Marijuana capital of Europe was ordered, beautiful, and pretty damn charming. It’s very livable city — far more than my current home town of London. I could move there quite happily and slot into my new bike riding life.

Amsterdam is a city that has so much more to offer than simply a few Coffee Shops. The Anne Frank museum is hauntingly claustrophobic. The Van Gogh museum brings to life the story behind the tortured artist who cut off his own ear. The story seeming to be that the man was an egotistical introvert.

The Red Light district is an important part of Amsterdam, but it’s only a part. Don’t get me wrong, you ABSOLUTELY have to go! Bored, texting prostitutes eyeing each other off across the narrow alleyways is nothing short of absurd. And the novelty condom shop? Simply brilliant. Although I think their usability as actual condoms is somewhat limited.

However beyond the coffee shops and booze brigade, there is a layered city with a unique culture.

See an Ajax game. The Amsterdam folk (Amsterdamians? Amsterdammers?) are mad about football. Ajax is the local team, and come rain or shine (or snow, in my case), they’ll be out to support them. Prepare yourself though for high-risk games and the stadium is alcohol-free. Don’t worry, you can always warm yourself with a nice cup of vending machine imitation coffee.

How to be a cultural genius:

Amsterdam is home to some incredible art. You could definitely do worse than spend a few hours in the Van Gogh museum, and you’ll probably find yourself recognising several works from high school art class. I would recommend paying the extra and getting the audio guide – without it, it’s just a bunch of pretty pictures, and the place is dedicated to Van Gogh, after all.

If you only make one cultural visit on your trip, however, make it the Anne Frank museum. Even if you’ve never read her diary, a wander thought the claustrophobic quarters where the Frank family hid from the Nazis for two years is a haunting experience that will stay with you forever. This memorial attracts hundreds of thousands of visitors every year; it may look like a long line, but never fear – it moves quickly.

The Rijksmuseum is also rather beautiful, plus you can drop Rembrandt’s name to your less culturally inclined buddies.

What not to miss:

The novelty condom shop. Condomerie is located in the heart of the red light district and is home to every condom you’ve never wanted to see used. Cute little animals, footballs, and of course the cannabis leaf adorn the end of hundreds of condoms on display. They make awesome novelty gift for mates back home, but to actually use? Hmmm.

What not to do:

Please, no smoking weed in the streets. It makes the locals cranky.

Don’t buy bicycles on the cheap that are very clearly stolen. They will be stolen back from you. Promise.

Heineken. Amsterdam is the city that founded the lager, after all. The original brewery has been turned into a ‘Heineken Experience’, an interactive tour that will leave you a few drinks down and weirdly loyal to the Heineken brand. At the end, you can choose to exchange two drink tokens for two drinks, or both drink tokens to ‘play the Heineken game’. The game, as it turned out, was to pour your own beer. As a bartender I politely declined, and with the help of my brother found as many dropped beer tokens as we could. Afternoon well spent.

If you want some canals, stay in the city centre – anywhere between the train station and the Stadhauderskade will do. For a more vibrant atmosphere there are plenty of hostels to be found in the Red Light District itself.

How to get around:

You can pretty much walk to anywhere in the city centre in less than 20 minutes. If you feel like exploring a bit, Amsterdam is the bicycle capital of the world, and there’s plenty around to hire. A taxi will cost less than â‚¬10 for most journeys, so if you’ve had a bit too much to drink, hop in.

The trams are pretty much free. I mean, they’re not actually free, but ticket inspectors come along so rarely, they pretty much are. Think of the tram system in Melbourne and that will give you an idea. Ride at your own risk…

Which coffee shop to visit

Much like how many times is the ideal number to hit to snooze button, this is not a question anyone can answer for you. The general rule is, the further out from the city centre you are, the less touristy the place is. I spent a happy unknown amount of time in a coffee shop that combined rock music and nature documentaries, which was only ruined by some jerk reporter who decided to start filming his own documentary. I’d recommend going there in a heartbeat, if only I could remember what the damn place was called. When it comes to finding a coffee shop, just excuse the pun and follow your nose.

Mellow Yellow is the oldest coffee shop in Amsterdam, but the best? You’ll just have to find out for yourself.