Amsterdam – fit for a Queen

With Queen’s Day celebrations (Koninginnedag) turning Holland orange this weekend, CLAIRE ADAMS got in early to explore the Dutch capital, Amsterdam, and check out some hidden gems.

by Claire Adams
in Inspiration 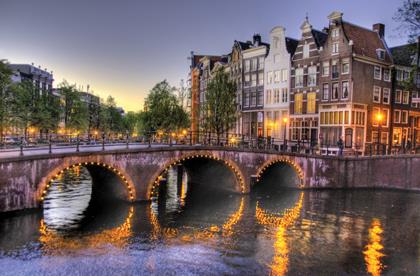 WE regularly take advantage of subsidised travel on the European mainland through my husband’s employment. At the moment he is working in Utrecht and we spent a weekend in Amsterdam to spare him the commute home back to London.

This was our second visit, so we knew the tourist pitfalls and haunts; the bikes, the trams, the coffee houses, the canals and the infamous red light district.

Fairytale food in The Dam
After a flight of about one hour from Luton, we met at Schiphol airport on Friday evening and took an easy cab ride to a very retro, pink hotel overlooking Vondelpark. We wondered a few blocks away to find ‘bond’, a restaurant with a fairytale narrative for every entry on the menu. The food, which was very tasty, was placed on the plate with military precision; some vegetables looked like they had been especially trained. As we paid the bill and left, we noted the word ‘Michelin’ on the door. We believe this to mean ‘expensive’ in English.

Worth the price (but not an ear)
With no specific plans for Saturday, we bought a 24 hour travelcard for â‚¬7 and spent it on the trams. We ate caramel and nut pancake for breakfast at Oesterbar and then headed back on the public transport for more Dutch sightseeing.

En route to the Van Gogh museum, we discussed the maximum we would be willing to pay for entry. We both agreed â‚¬10 a piece, but were stretched to â‚¬14 each, plus a fiver for the audio tour. After two hours there, we thought it well worth the outlay and mandatory for any visitor.

Walking delights
We did quite a bit of walking, which Amsterdam is made for. It is as flat as a drained bog, with only the bridges over canals to raise your heart rate. The architecture primarily looks like an ordinary set of flats which have been concertinaed into a small, narrow, elongated space. The canals are also picturesque and every photo is a composition with wildlife, boats and barges. We could not escape the shopping in the city centre, where we purchased some ‘high grade’ jasmine and green tea. We avoided the Condomerie, although we were intrigued by the knitted condom in the window. We passed a number of coffee houses, not to be mistaken for cafes, where we could smell what they were selling from the street outside. Loitering meant immediate intoxication.

After a late afternoon nap in our hotel, we emerged, determined to savour the notorious nightlife of the city. A previous visit to the red light district was an introduction to how sex is sold. We were disappointed the ladies had space only to stand in, as we imagined they would be interacting with each other like a Myer Christmas window. We tracked down the Banana Show and compared prices across establishments. The going rate is â‚¬35 per person, which was well over our â‚¬10 maximum. We decided we were not that desperate and passed on the live show. A Google search later satiated our curiosity. We know what happens to the banana.

On ya bike
On Sunday we hired free bikes from the hotel and spent a very cold day negotiating pedestrians, trams and traffic along the canal network. The bikes had no gears, back pedal brakes and were very heavy.

Amsterdam has a healthy respect for all modes of transport and we appreciated this whenever we flew headlong across an intersection desperately grappling at the brakes.

For Sunday lunch, we were drawn to an ‘All you can eat tapas’ for â‚¬9.95. This is like a Meze Challenge, only Spanish. After being forced to eat a set selection of dishes, we were then allowed to choose what we wanted for the advertised price. The waiter threw down the menu with disdain when we finally made it through the potato, olive and sizzling shrimp smorgasbord. We were stuffed, but determined to win the battle. The key is to avoid the bread at the beginning.

Coming back for more
Dragging the bicycles onto the train and heading back to Schiphol station, we parted company, with each other and the beautiful Dutch capital.

We realised we missed many things – the Sex Museum, the Ann Frank museum, Amstelkring, The Jewish Quarter and the proliferation of weekend markets, but we know it is there for the taking when another weekend is going spare.