Leaving the beaches of Sydney in January for the colder climate of neutral Geneva was always going to be a shock to the system, not only in terms of temperature but culture too. Switzerland, in my opinion, is a country which confounds, amazes and frustrates, all in equal measure. 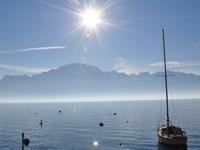 BECOMMING accustomed to the local regulations is an important first step. For example, men can be fined and reported to authorities for going to the loo standing up after 7pm on a Sunday. Indeed any activity which warrants lifting more than a TV remote control on the sabbath is considered sacrilege and leaves you open to beady-eyed neighbours reporting you for exerting yourself.

This enforced relaxation aside; the spectacular Alps skyline which greets you as the plane sweeps through the vast valleys of rural France and into Geneva feels like the view one gets when flying into Sydney for the first time, with the Opera House and Sydney Harbour Bridge.

Geneva is of course increasingly popular with businessmen but it is easy to forget that there is so much more to Geneva’s make-up than money, expats and fondues. Given the restrictions around strenuous activities on a Sunday, there are numerous exciting getaways to be found in and around the Geneva/Vaud canton. With the nearest seawater 400km away the premier ski slopes of Europe surrounding Geneva are more than an able replacement. Resorts like Verbier and Chamonix are but a stone’s throw away, and for those seeking a less energetic jaunt on a weekend, there is no better place to start than by following the lake route from Geneva through to Montreux.

Along this 50km route, you get an immediate sense of the simple beauty which the Swiss countryside provides. On most days there is the milk pond serenity to Lac Leman whilst the caster-sugared snow tops of the Alps and the Jura dominate above. The biggest decision you’ll have to make is whether to check out the country hamlets or visit the bigger towns like Lausanne and Montreux, the latter being the inspiration to Freddie Mercury’s last Queen Album, ‘Made in Heaven’. When the sun hides behind the mass of mountains across the water leaving burnt orange clouds reflected in the glistening shimmers of the lake, I can begin to see what he meant.

Losing yourself for a couple of days exploring this enticing route through the country hamlets is very easy.

Coppet is a good place to start. Ten minutes north of Geneva by train and equally straight forward by car on the attractive lake road, Coppet is a charming village dominated by a 17th century chateau (open from March through to November). The origins of the village actually date back to the 13th century during the reign of Emperor, Henry II. A cobbled street and an old archway represent the heart of Coppet, introducing the unsuspecting visitor to a small number of craft, art and antique shops. Although pricey, the Hotel du Lac, with its premier views of Evian and Mont Blanc, is well worth an overnight stay especially if one has eaten and drank too much at the delightful ‘Auberge du Chateau’, a restaurant close-by.

The historic town of Nyon is ten minutes further on down the road. It’s one of the region’s most attractive towns and home to the imperious Chateau de Nyon, perched high up on the hill from the lakeside. The foundations to the chateau and indeed Nyon go back to the Julius Caesar era with major restoration coming from the 16th century during Bernese rule. The extensive collections of porcelain art and paintings are highlights, as are the views on a clear day. Nyon is great place to have a lazy wander along the steep walkways which take you from the water’s edge to the centre of town.

Otherwise, stay around the lake promenade where there is ample opportunity to have a glass of wine and soak in the panoramas. For those wanting cultural overload, fear not, as there are a number of interesting Roman artefacts housed in the nearby Roman Museum and the three Roman pillars looking out over Lac Leman serve as an impressive reminder to the history embedded in this part of the country.

For any newbies getting accustomed to the Swiss way of life and the natural beauty for which this part of Switzerland is renowned for, Saint Prex was perhaps the best walk my wife and I took — it convinced us that moving to Switzerland was the right choice. Saint Prex does not have the chateaus or Roman remains that Nyon and the many hamlets and villages leading to Lausanne do, but for simple beauty, glorious Georgian architecture and quite breathtaking views of the lake, Saint Prex more than deserves its standing as a place to visit.

The simplicity of Saint Prex is the main attraction as it is located on a small peninsula. The walks along the lake go for miles and it is well worth exploring the cobbled streets of the centre, with its antique shops and art galleries. As for the culinary examination there are some of the finest cakes and cheese in all of Vaud to be found as well as quaint and twee real estate, making it one of the more enviable places to live. Sadly you would have to have a salary of a successful private banker to entertain the idea.

This barely covers the half-way mark to Lausanne. Morges and Pragines would be next on the itinerary. Or perhaps a 30 minute detour to Jura to get an afternoon’s skiing in before the light begins to fade? To think that Geneva was only renowned for its neutrality, the diplomat and a never-ending supply of Toblerone. Shame on me.