OKTOBERFEST, PAMPLONA & LA TOMATINA | The holy trinity of festivals - positively essential and nothing less than travellers' rites of passage. If you don’t get your ass to at least one of them you aren’t trying hard enough! Let's get messy ... 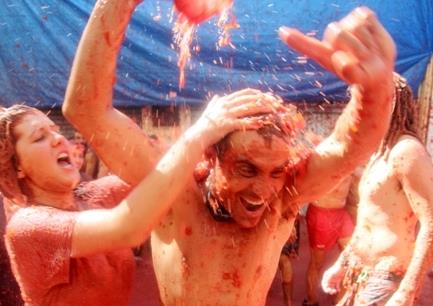 OKTOBERFEST + RUNNING OF THE BULLS IN PAMPLONA + LA TOMATINA

Festivals don’t come crazier than those found in Europe, and as an Australian, you’re probably brave enough to venture to one. Nowhere else do you find the sheer scale of wacky and weird festival choice; from the cheese rolling of England to the Cannabis Cup of Holland, there’s truly something for everyone.

There remains, however, the holy trinity of festivals that are positively essential, nothing less than rites of passage, and if you don’t get your ass to at least one of them during your time in London you simply aren’t trying hard enough!

Rampaging bulls, the mother of all food fights and loads of beer, sound good? Come on Aussie, come on!

Now, go get amongst them…

Pamplona: The one where the bulls run

La Tomatina: The one where they throw tomatoes

Oktoberfest: The one where everyone is drunk on beer

In sound: Music festivals to travel for